“She was drinking a lot of wine when she painted it,” the Limo Driver explains 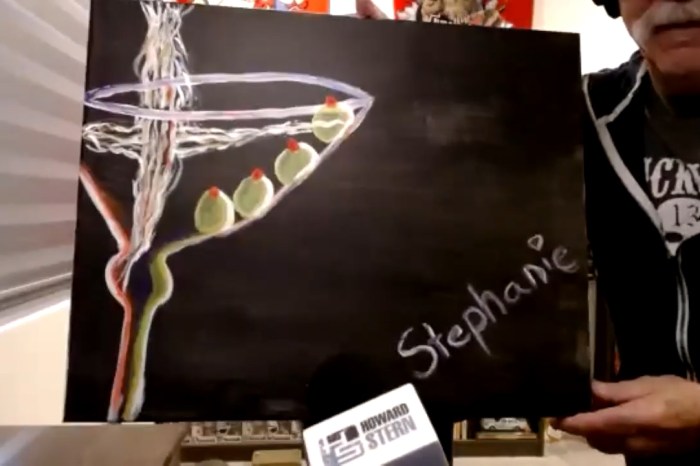 Apples, a frequent caller obsessed with the social media posts of staffer Ronnie Mund and his fiancée Stephanie, phoned into the show on Tuesday morning to once again update listeners on the couple’s recent social media activities.

“I see that Stephanie is painting on Instagram now. Is she trying to be like Howard?” Apples asked. Listeners will remember the caller suggested back in February that Ronnie’s fiancée had emulated Howard’s wife Beth by eating a certain breakfast cereal.

This latest question made Ronnie irate yet again. “She’s not trying to be like Howard. She went to a fucking painting party, you moron,” he told Apples, adding, “It was an all-girls party where they go and they just hang out and drink wine … And they did a painting. Big deal!”

Howard and co-host Robin Quivers were eager to get a look at Stephanie’s work of art, so Ronnie brought out the painting—depicting a four-olive martini—on camera for all to see.

“Yeah, she was drinking a lot of wine when she painted it,” Ronnie laughed.