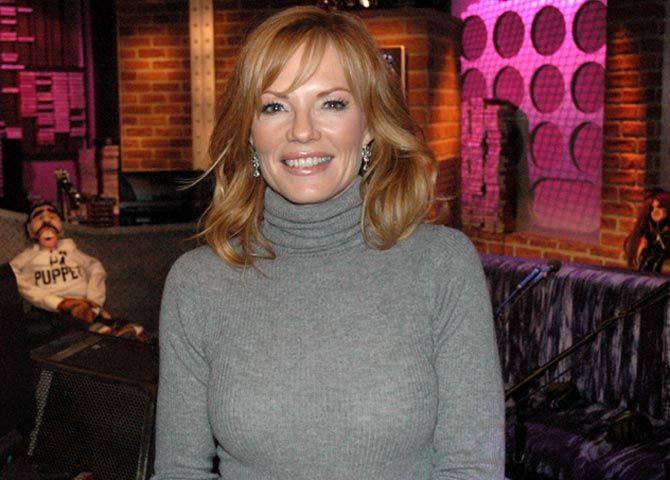 Marg Helgenberger from “CSI” came in to promote her new movie, “In Good Company” – which opens this weekend. Howard had interviewed Marg back in 1993 for his first E! interview show and said she looks even better now then she did then. He thought she might have gotten implants, but she said it was just a push up bra. Howard talked to her a little while about how a lot of people think it’s a bad move to do so many “CSI” spin-offs because it just drains talent and originality away from the original series. Marg agreed and said she and many of her cast mates are perturbed by it too. She said the three main writers for “CSI” are already so busy with the other shows that they’re not giving the original show their full attention. Although, the original remains the highest rated drama on TV, so it can’t be that bad.

Howard asked Marg if she every appeared naked in a movie and she started stuttering a lot, eventually saying no. Then she changed her answer to a maybe, saying there might have been a side shot once. Gary came running in with a full frontal nude shot of her he found on Mr.Skin.com from the movie, “Frame by Frame”. Marg said that was a Showtime movie she shot and had forgotten about. She said that was it though, but then Howard found a nude shot of her from, “Species”. Marg refused to believe it was her though, because she never got naked in that movie. Then she said it must be from a director’s cut off the DVD or something.

Marg has been married to the actor Alan Rosenberg for 15 years and says she never feels the need to get some, “strange.” She said she was with 10-12 guys before him, but Alan is great in bed and she has no need to look for other guys. Marg plays an ex-stripper in “CSI” so Fred started playing the song, “Table Dance” by 2 Live Crew, (the “can a nigga get a table dance” song). Marg was trying to figure out what the lyrics were and repeated the refrain, but said “Nig-ger” instead of “Nig-ga”. Howard told her there was a huge difference between the two and Artie started goofing on her for saying that. Artie said he bets this will be front page news on the NY Post tomorrow.

Howard said fortunately no one reads the Saturday Post. Towards the end of the interview Artie asked her if she would say “kike” for him, but she declined.