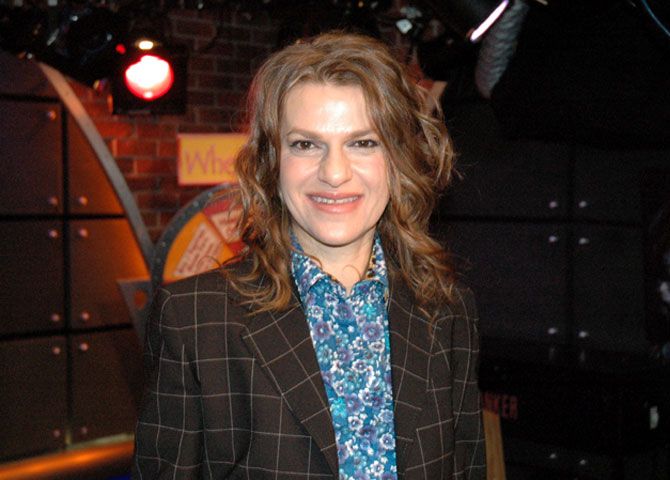 Comedian Sandra Bernhard was on the show today to promote her upcoming gigs. The last time she was on, she revealed that she had slept with Jay Leno when she was about 20-years-old. At the time, she said Leno was into spanking and had a very big penis. Sandra said after that show, Leno called her freaking out about what she said, but promised it would NOT affect her ability to get booked on his show again. Of course, she has yet to be booked back on the Tonight Show.

Now that she’s co-starring in the “L Word” on Showtime and also appears regularly in NBC’s “Crossing Jordan,” Leno has plenty of reasons to book her, but we’ll see. Gary said he’s a big fan of the “L Word” because it gives him great whack-off material. His wife doesn’t like the show so she doesn’t watch, which allows Gary to watch it alone and then go into the bathroom afterwards to finish himself off. Howard bet that Sandra would eventually hook up with one of her “L Word” costars, but Sandra said she’s been in a serious relationship with a woman for five years now. She said they are monogamous, although they sometimes bring men into the bed with them. However, she only brings in men when her daughter is staying at someone else’s house. Howard said he’d wait for Sandra to invite him over and if the kid was there when he showed up, he’d know he wouldn’t be getting any three way action. Sandra didn’t want to reveal who her girlfriend was or talk too much about her, but Howard found a picture of her and said she was really cute! Because Sandra couldn’t believe Howard had found a picture of her girlfriend, she decided to talk more about her. Sandra’s girlfriend was straight when she met her, but Sandra was able to turn her. Artie said he’s turned a few chicks in his day. The woman was writing an article about Sandra and they got to know each other pretty well and eventually hooked up. Sandra said they were friendly and hung out a lot and then one night, after seeing Sandra’s show, they went back to Sandra’s apartment. Once there, Sandra leaned in and kissed her and that was that. Howard said that was a good move because he probably would have wanted to talk things out first and that would have ruined everything. Sandra wouldn’t reveal anything more, though, because she had to go, but Howard made her promise to pick the story back up from this point the next time she’s on.