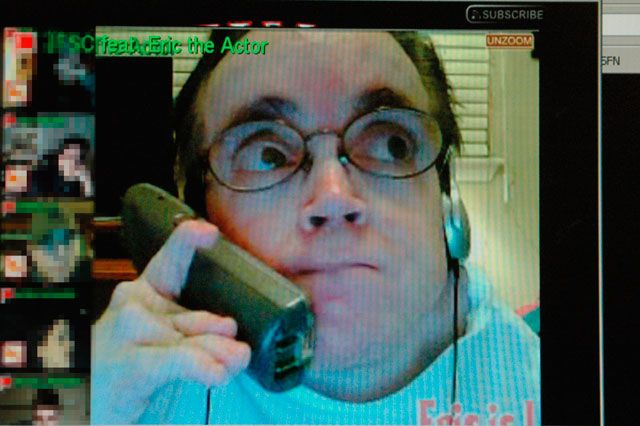 Eric the Actor, who could’ve been the owner of a brand new sex doll. Photo: The Howard Stern Show

Howard had an update today on Eric the Midget’s performance in the NBC show “American Dreams.” Last month Howard was able to help Eric achieve one of his dreams by landing him a small role on one of his favorite TV shows. Howard even negotiated a high salary for him with free plane tickets and a hotel room. After shooting his scene, Eric left Howard a voicemail making all sorts of demands for today’s interview. He told Howard there was to be absolutely no “toilet humor” and he wasn’t to ask Eric if he had gone home and pleasured himself to the girls on the show. Howard got Eric on the phone and told him that his demands made him sound a little ungrateful. Eric said he did thank Howard in all the video that E! shot though, just not on that particular voicemail. Howard played Eric’s scene from the show and thought he did pretty good. He then asked Eric if he pleasured himself to his co-star in his scene, Daphne Zuniga, who also happened to be on the phone at the time, Eric refused to answer. Daphne said she actually appreciated Eric’s discretion because few men in Hollywood stick up for women like that. Howard said he thought Eric was going “Hollywood” on him by making all these demands.

Howard told Eric that he was pretty proud of the work Eric did on “American Dreams”. He said it’s not an easy thing to go on a TV set for the first time and perform, especially on a show that you love, and Eric had done a very good job. Eric thanked him and then asked Howard why he had told Marty the Midget that no one had ever told him that the word “midget” is like the “N” word to little people – even though Eric has told Howard this many times. Howard told Eric he that was lying to Marty, plain and simple. Eric said he wanted a new name now and Howard asked him to suggest some. Eric suggested Eric the Actor or Hollywood Eric. Howard said he actually liked Eric the Actor a lot, so he’ll consider it. However, he’s still refusing to buy into the idea that the word “midget” is as bad as the “N” word. Artie told a great story about midgets on the set of his movie “Dirty Work” with Norm Macdonald. He said they had used a midget in the movie and the production company had the guy on the call sheet as “midget”. The call sheet is a document that’s handed out to the cast and crew every evening detailing when they are due on the set the next day. That day’s call sheet read something like, “Norm Macdonald – 8:00, Artie Lange – 8:30, Midget – 8:30?” The guy playing the midget freaked out about this and refused to come to the set. He called his agent and the agent in turn yelled at the producers. The agent told the producers that his client had a real name, Paul, and the name on the call sheet was insulting. He questioned whether or not the crew of “Dirty Work” thought they were working in the 1820’s or something. They ended up canceling the entire day of shooting over the incident and the producers were so afraid of a lawsuit, they made sure the call sheet was changed permanently. The call sheet was changed, but the next day it read for, “Paul the Midget” to be on set at 8:30. Artie said it was hysterical, but the guy freaked out again and had to be calmed down.