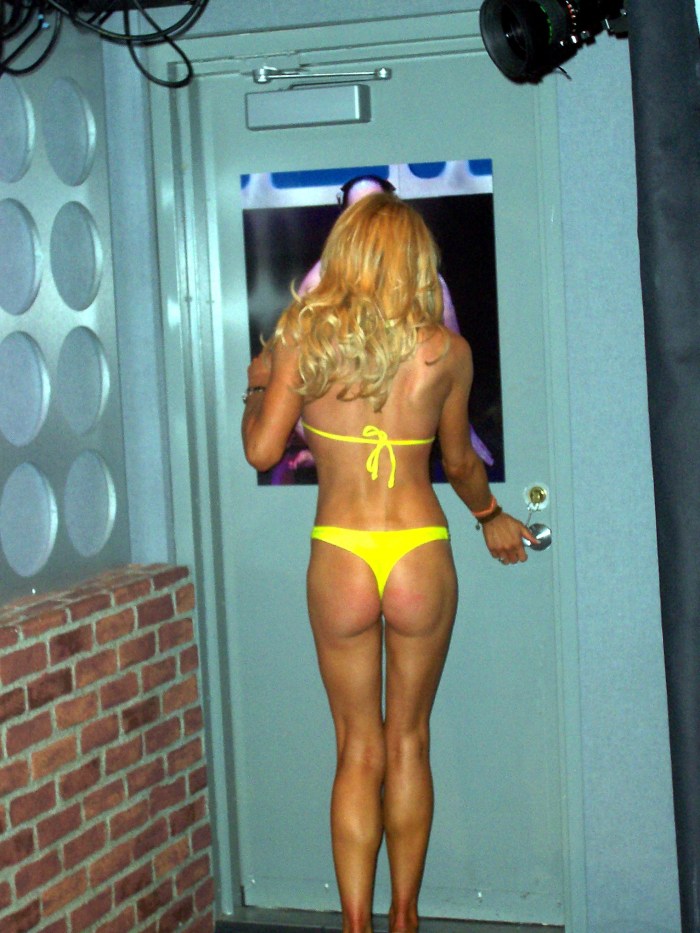 Nikki Ziering came in to promote her new movie National Lampoons Gold Digger and looked smoking hot. Howard said since she wouldn’t answer the political questions we had prepared for her he wanted her to answer questions about her ex-husband Ian Ziering. Howard asked her questions about his birthday and stuff and to everyone’s surprise she knew all the answers. Howard didn’t think she’d get any of them. But then the interview started to drag because Nikki wouldn’t talk about politics or her sex life. All she would say is that she didn’t’ have a boyfriend and hadn’t had sex in at least two weeks. Everyone was bummed she wouldn’t open up and Howard was toying with the idea of having her sing karaoke, but then CBS VP Vinnie Favale called in to save the day. He told her that if she got in a bikini and had her picture up on howardstern.com that it would be up all weekend and millions of people would see it. He said that would almost surly propel her movie to #1.

Nikki got excited by that prospect and almost immediately got into a yellow bikini. She needed help tying her top on, and Gary “Baba Booey” Dell’Abate was standing by the bathroom door and saw her topless and helped her out. Howard was upset that Gary didn’t let him do it. Then Nikki came out and Howard made her get in the tickle chair. He said she could get a plug for the movie every time they tickled her, so everyone asked her questions about the movie, like who directed it, and Howard tickled her every time. She was really laughing and shrieking and getting into it. She started saying she needed water because she was thirsty and Gary gave her some, but every time “accidentally” spilled water all over her. The scene was so hot that Artie and Jon Hein were literally speechless and couldn’t think of anything to ask her. Thank goodness Robin wasn’t turned on by Nikki and had a clear head to talk to her. Nikki said she was getting really turned on, which frustrated her because there was nothing she could do about it. Howard said he was also aroused and had to sit down. The interview ended up being so great, that Howard is bumping tonight’s E! Show with Chris Rock to rush this one on the air.

After a commercial break all anyone could do was talk about Nikki. Howard said that during the break Nikki pulled him aside and said she was serious about how she couldn’t’ find a date. Robin was laughing about how Nikki was hiding her ass when she came out of the bathroom like she was ugly or something. Howard said hot chicks that don’t think they are hot are the best chicks ever. Robin then wondered aloud why Vinnie would promise her that her movie would be #1 with the help of the website. Artie pointed out that guys lie to chicks all the time to get them to do stuff. Howard took some phone calls and everyone was saying how great the interview was, including one guy who claims he had to pull his car over and pleasured himself in a McDonald’s parking lot. Howard then claimed his hand smelled like the lotion Nikki put on herself and made Artie smell his hands. Artie commented on how hot Nikki’s ass was and Howard said his favorite part about her was her legs. Howard thinks that Nikki may now be the hottest girl we’ve ever had in the studio. Howard thinks this was award winning TV and if CBS was smart they’d just buy this episode and release it as a movie or put it on TV. Howard now wants every female guest in the tickle chair.