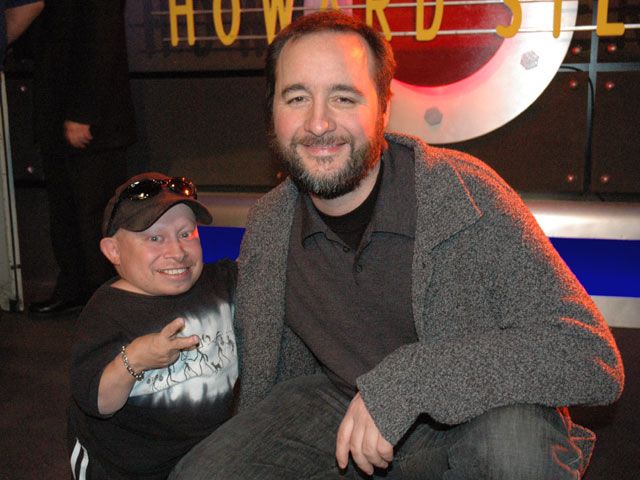 Howard had Mark Cronin and Genevieve Gallen (Verne Troyer’s estranged wife) call in today to debate some of the claims Genevieve had made on the show a couple weeks ago. According to Mark, things went bad after he had sold a reality show to NBC about Verne, his manager and her husband — all little people.

Mark claims that Genevieve, fearing she would be left out of the project, “forced or cajoled” Verne into marrying her in a rushed, almost secretive ceremony. Then she “waved her wedding ring” in Mark’s face and told him the show would now be about her and Verne, a la Nick and Jessica. Mark claims that Genevieve “demanded” a salary, a producer credit and to be the costume designer for the show. Genevieve swore on her father’s life that she did not “demand” any of these things and only recalls that Mark “advised” her to get an annulment in the interest of Verne’s career. According to Genevieve, she had just spent 2 months helping Verne with his “disease” and was concerned that the show would be unhealthy for Verne, as it was centered around Mini-Me living a movie star lifestyle of clubs, women and drinking. Mark said he laid out a plan for Genevieve that would have allowed her to be a part of the show and possibly have a TV wedding as part of the next season. Mark basically feels like Genevieve was only with Verne for the money, not love. Genevieve said her only concern was Verne and that the show — as originally planned — would not have been good for him either physically or mentally.

Daddy to the Rescue

During the debate, Genevieve’s father, Jeff, called in. Jeff said Gen was very down to earth and no “bimbo”. There was no way she was a “gold-digger.” Mark agreed that Gen was the most down to earth girl in lingerie, at the Playboy mansion, chasing after Pauly Shore and Verne Troyer. Essentially, Jeff said the whole family loved Verne and had no problem with his size. In fact, he said that when he and Gen talked about the new show, they were both concerned that it was exploitive of little people. Howard took a call from a guy who said it sounded like Mark was only in it for the money and would do anything to keep Verne earning it for him. Mark said his relationship with Verne was a business relationship and that they were both in it for the money. Then Genevieve played a voicemail from Verne in which he tells her how much he loves her and how much he wishes he could tell everyone she was his wife — but he can’t right now. Finally, and most importantly, Gen told everyone that she was wearing a thong and lacey bra and would most likely use her Eroscillator on herself before she went to sleep (like she does most every night). Before she got off the phone, she did promise to try to get Verne to call in to give his side of the story and also revealed that Verne’s nickname for Mark was “C@#% Sucker,” which Mark said was true, but it was used in an affectionate way. Howard told Mark he had made a big mistake, he should have had Gen on the show, it would have been VERY interesting.