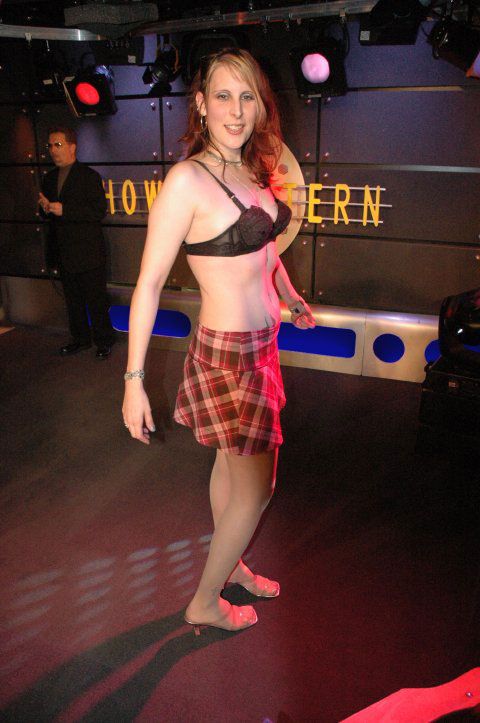 Ocean County College student Cheryl came in today to get a quote from Howard for a paper she’s writing on free speech. She’s an aspiring nurse and told Howard she really needs a good grade on this paper to get into a four year nursing school. Cheryl called Howard a few weeks ago on the air looking for the quote and agreed to come down and get topless for one. Howard agreed and was ready to live up to his end of the bargain. Howard said it was funny because Cheryl is 5’11” and Gary looked like a hobbit standing next to her. Cheryl sounded a little loopy and Gary pointed out that she was drinking some vodka in the green room. Cheryl said that was true and she’s also on several different antidepressants. Even Artie seemed shocked that she was mixing alcohol and antidepressants and told her she should pick one or the other. Cheryl said that the last time she got drunk while taking her drugs she got into a fist fight and then fell down, hurting herself pretty bad. Howard wanted to know why she’s on so many antidepressants and she said that she’s had a pretty bad life. She said her parents got divorced when she was 17 and threw her out of the house. She spent the next few years partying and then got pregnant when she was 21. She currently has a four-year-old kid and is trying to get her life in order. She’s currently living with her boyfriend, the father of her child.

After sorting through her life, Howard told her it was time for her to ask her questions and get topless. Howard told her that if she got completely naked, he’d give her a really, really great quote but she declined. She said she’s not really proud of her ass right now and didn’t want to show it off. She took off her top and bra, eliciting approval from Howard who said her chest wasn’t bad. Cheryl seemed relieved at that and said she’s very worried about her body, but everyone here was making her feel better about it. Cheryl then asked Howard her questions –

#2 – How does he feel about early censorship against things like the Rolling Stones and Elvis A – Howard said that it just goes to show how stupid censorship is. He also pointed out that the same people who wanted Elvis censored are now his biggest fans and taking trips to Graceland. And the Rolling Stones are so mainstream that they’re being played in every major commercial. He added that it just proves that nothing should be censored.

#3 – Does he feel any content on the show offends people? A – Howard said he’s sure it does because he talks off the top of his head and gives his opinion and that is always likely to offend someone somewhere. He said that all he has to say to those people is “F You!!” Cheryl then wanted Howard to give a statement about censorship so he yelled that everyone who wants to hear a true celebration of free speech should follow him to SIRIUS. He then apologized for yelling and said he just got all worked up. Cheryl tried to get some breast implants from Howard, but Howard told her that her boobs are fine and she should leave them as they are. He then joked that if she wants breast implants she should do what every other girl does, marry Sam Simon.