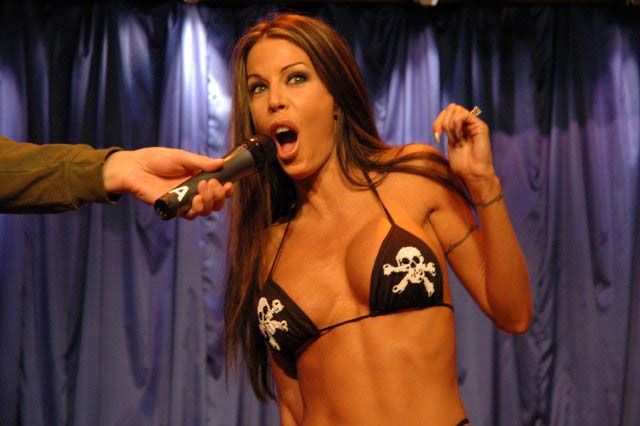 Tabitha’s return to porn is one of the reasons she decided to bleach her rectum. Howard said that Tabitha has already had a ton of work done to her body and wondered how much plastic surgery she’s actually had. Tabitha started to list off a bunch of work she’s had done to her body which includes 6 boob jobs, 3 nose jobs, a nose implant, cheek implants, having fat sucked out of her legs and injected into her face, botox and lip implants. She’s never had liposuction but she wants to. Howard said there wasn’t an ounce of fat on her and couldn’t imagine where she wants to have the fat sucked out.

Tabitha’s newest transformation was to have her rectum bleached but that was done with a cream, not a surgery. She said they had to wax out all the hair back there which hurt a lot but said the cream didn’t hurt at all. She just rubs it in before going to sleep at night and it keeps her ass nice and clean looking. Howard asked her to show off what was going on back there so Tabitha disrobed and bent over for everyone to see. At first Howard was having a hard time seeing anything different back there but then Doug Goodstein shined a flashlight on it for a better look. Tabitha said she’d allow one of the guys here to rub the cream on her to demonstrate how the process works but no one jumped at the chance.

Finally, resident perv Richard Christy volunteered and donned some white medical gloves to do the deed. He put some of the cream on his finger and even he admitted that this was creepy and he had some reservations about doing it. But being the trooper he is he went and applied the cream and then said he was going to sell that glove at Ebay.