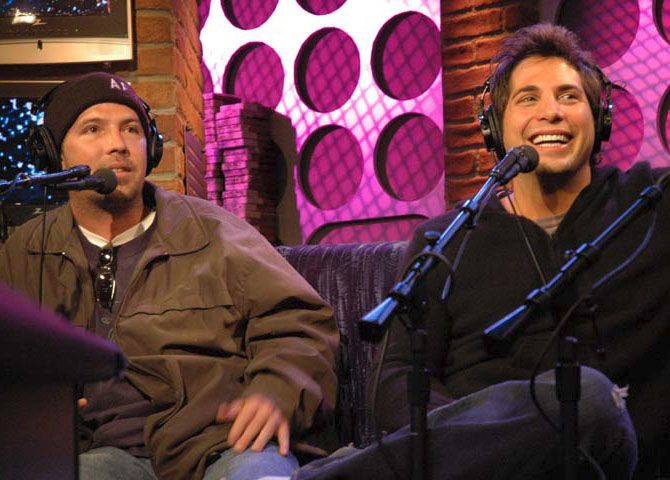 Comedian Doug Stanhope and “Girls Gone Wild” founder Joe Francis came in to promote the “Girls Gone Wild Halftime Special” that will be available on Pay-Per-View during halftime of the Super Bowl next week. They brought in four of the girls that will be in the special and they were all smoking hot.

Joe explained that, during halftime of the Super Bowl, these girls will do all sorts of sexy competitions. One of the competitions involves two girls on a mattress resting on top of a “bucking bronco” machine. Then, while the mattress moves all over the place, the girls will have to get into the various sexual positions that people shout out from the sidelines.

Howard and the guys started yelling out sex positions for the girls to get into so they could know what to expect. Howard yelled out, “Missionary!” Joe yelled out, “Reverse Cowboy!”

Doug yelled out “Find the corn!” — then admitted that he made that one up.

Howard tried to find out a little more about each girl. One of them, Kerri, used to be a cheerleader. Another one, Athena, was 18-years-old and had just graduated high school. She wants to get into cosmetology or modeling. Dark-haired Jolene was the Homecoming Queen and the Prom Queen at her high school. Another girl, Andrea, had hosted some nude shows in the past, but refused to kiss a girl on camera.

Howard finally got Jolene and Andrea to take their tops off after Jason promised the picture would make the front page of Howardstern.com. However, they still wouldn’t make out with each other.

Jolene said she wanted to get breast implants, but Howard told her not to because she was perfect.

Howard asked if Doug slept with any of these girls and he said no because on top of being married, he doesn’t want his DNA anywhere within 100 feet of Joe Francis. Joe’s always in legal trouble.