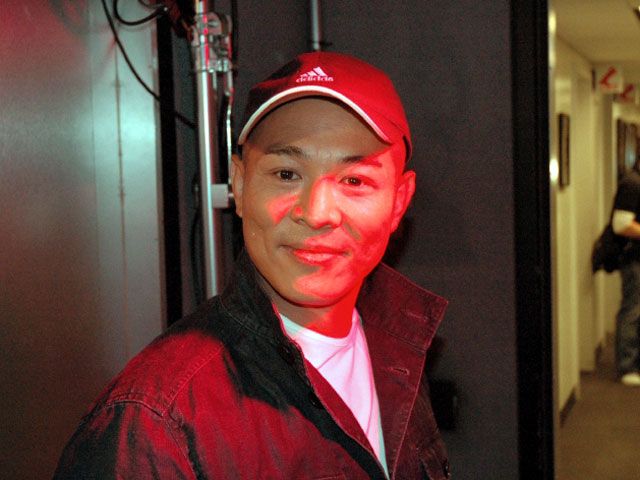 International movie star Jet Li came on the show today to promote his new film “Unleashed”. Jet Li came in with an interpreter and a manager but he didn’t really need the interpreter as he spoke decent English on his own. Howard asked him if he saw the “Karate Kid” and wondered if he trained like Daniel-san did? Howard then yelled out “Wax on, wax off!! Show me paint the fence!” Howard said the movie is funny because Daniel-san does some house work for four days and then he’s the greatest karate guy in the world. Jet Li laughed and said that his own training took much longer. He started when he was just 8 years old. Howard wondered if he ever kicked anyone’s ass with karate but Jet Li said no. Howard said that sounded like a waste. He said that if he could kick people’s asses like that he’d go out on the street waiting to be mugged just so he could use his karate on people. Jet said all he wants to do is smile at people and be nice. Jet said he’s trained in all kinds of weapons too, like Nunchucks and Chinese stars. Jet has survived some harrowing situations in his life. When he was starting out his movie career in Beijing the Chinese Mafia wanted him for a movie but Jet turned it down. So the mafia had his manager killed. Howard related this story and Jet said that he doesn’t know for sure that the mafia had his manager killed, but his manager died in some unknown fashion. Jet also survived the recent Tsunami. He was vacationing in Thailand and was walking on the beach with his children when the water started coming in; he picked them up and ran for safety. He said the water reached him and almost went over his head but he held on to his children and they all survived.