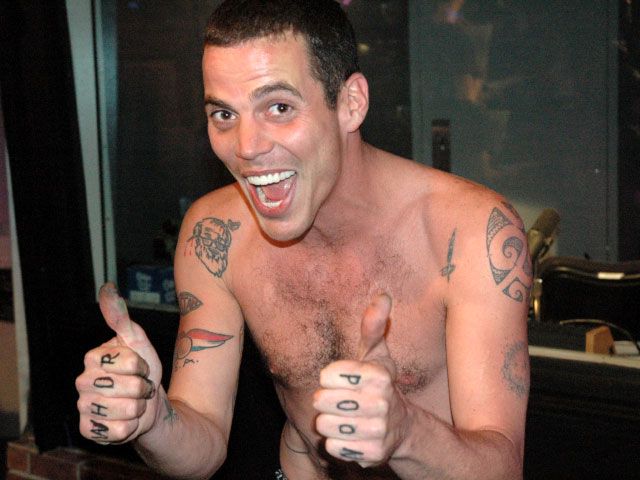 Finally, Steve O got his moment. Prior to being interrupted, Steve told Howard about his recent (almost) trip to space aboard a Russian MIG fighter jet that flew him to the edge of the earth’s atmosphere. He said the best part was puking in zero gravity at almost twice the speed of sound. Steve also has a part in a new movie coming out called “Murder Ball” which is about a paraplegic, wheelchair rugby league.

He explained that he got the cut he was sporting under his eye playing what they call the “Black Eye Game”, where one guy holds out his fist and the other guys run into it face first. Howard asked if Steve was still going out with his model girlfriend, but Steve said they had broken up. He did tell of visiting her family in Denmark over vacation though, and how his girlfriend’s mother had walked in on him lying buck naked on the floor in a puddle of his own urine. He blamed it on Xanax and red wine. Steve said he also now has his own line of shoes called Sneaux and loves the fact that he gets to produce his own commercials for them. This is where HPE interrupted him and Steve was happy to get back to the real reason he was there, to give E! some outrageous tape for the final show. Steve said his idea was to let the guys throw tattoo ink filled darts at his bare ass. Howard wasn’t sure he was up to that and let Artie go first. Artie’s first dart didn’t stick – he said he’d never thrown darts at a guy’s ass before – but the second one did. This gave Howard what he needed to be able to do it himself and he hit a bull’s eye; making a nice permanent mark on Steve’s ass. Fred passed on his turn so Howard went again, hitting Steve in his taint this time. Artie took the final shot which stuck in deep, causing an uproar from the crew. Steve thanked the guys for leaving him with some lifelong memories of this historic show. He also got a little plug in for a TV show he is producing about running a kid’s summer camp, (which he said he has just started shopping around). Howard thanked Steve for being such a great final guest for the E! Show.