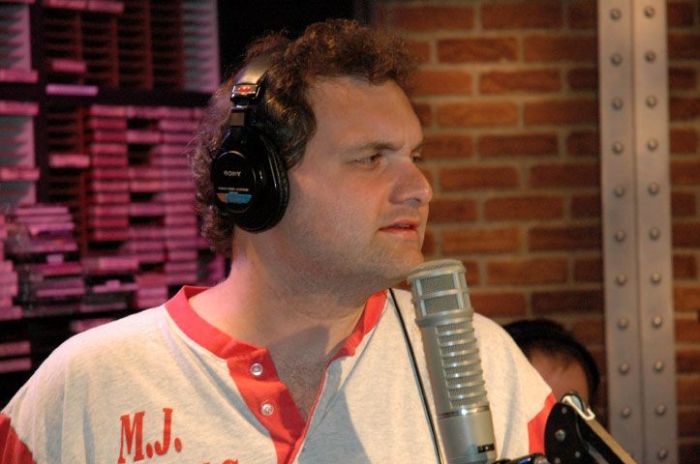 Photo: The Howard Stern Show
Artie was not happy this guy was saying these things about his sister. Basically, he didn’t want his sister’s dirty laundry aired on the show. This was his job not hers, so she shouldn’t have to deal with things like this. Although there were a lot of things about this guy’s story that Artie found hard to believe, he reiterated that he was not angry about that, just that she was brought up at all. Artie’s sister, Stacy, called in later saying she knew who this “kid” was and denied ever having done anything with him. Artie was really pissed off at this point and even stood up, (which he normally only does for hot chicks). Howard said he would give Artie KC’s number if he wants, but Artie wasn’t laughing. Gary said Artie looked like somebody just stuck a dog turd under his nose. When Howard told Artie this was a good thing to bring up with his shrink, Artie said he wasn’t going to see his shrink anymore. Artie said he went because Howard wanted him to, but Howard said he only suggested it because it helped him. Artie said he went 3 times and it wasn’t really helping anymore so he stopped. Artie said he was just doing what he wants from now on. He said what he really wanted to do was finish his movie so he could relax with a nice drink. Robin thought Artie was making this all about Howard and Artie said that he was one of those guys who always tries to please everyone. He said he got a great offer to do a movie in LA but he’d have to be gone from the show for a month to do it. Howard told him he should do what’s right for him. He said that if this movie is such a great thing, then he should do it. Howard said he wouldn’t have a problem with Artie doing this because that’s always been their agreement; Artie should feel free to do whatever he needs to do. Artie argued that wasn’t what Howard said when he wanted to take time off to film “Beer League” this summer. Howard countered that Artie never asked if he could, rather he asked what Howard felt about it and Howard felt that, since the movie was being shot locally, Artie didn’t need to take time off.