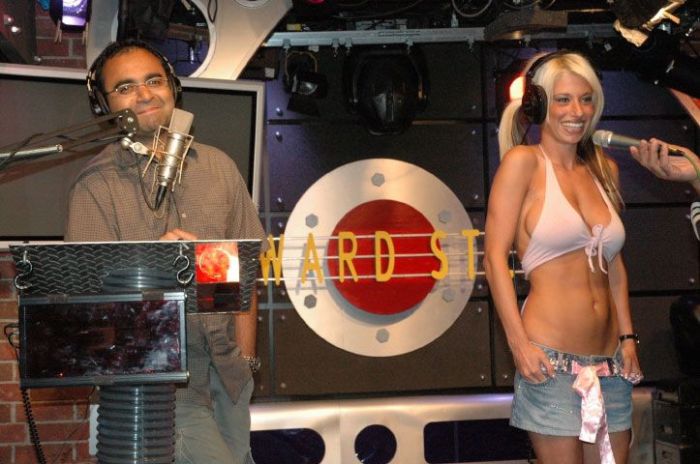 Photo: The Howard Stern Show
Howard said he had just learned that Dead Air Dave’s real name wasn’t Dave at all. He said Dave didn’t really like his real name and has said he’d prefer it if people called him Dave or Dead instead. Dave said he wanted to be Dave around the station. Howard wondered if Dave had been searched in the subways yet, but aside from taking them to Yankee games, he didn’t really use the subway. Howard thought Dave might be suffering an identity crisis. He explained how he worked with a guy named Lee Masters at E! for years only to find out that his real name was Jarl Mohn. Howard, showing off his knowledge of Indian culture, asked which caste Dave was from and Dave replied that he was in the second caste. Howard said that meant he could be a printer in India. Dave said he wasn’t a big fan of the caste system. Howard thought maybe he should try the name Andy Ghandi instead. Earlier, Howard had mentioned that one of the girls in the Hottest Chick/Biggest Fan contest claims to have slept with Dave. Dave said he was a little nervous about this, not knowing what to expect. Howard brought Lori into the studio and Dave said he never went out with her. She said they went out for pizza and even knew Dave’s real name was Ashok. Dave said he did recall going out with her, but stuck to his story about not sleeping with her. Lori said that was because they never did sleep together, although Dave did try. Howard said Lori was really good looking and thought she looked a little like a Yiddish Suzanne Sommers. Lori said she was 27, recently had a boob job, finances mobile homes for a living and has had a boyfriend for the last 2 years. When Lori mentioned that her boyfriend claims to have slept with Artie’s sister, she was met with an ice cold stare from Artie.