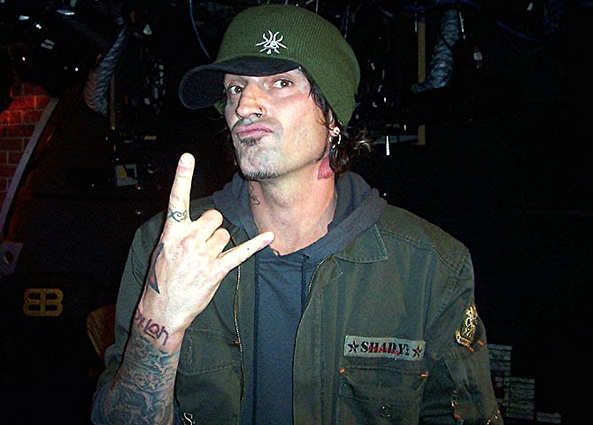 Crue member Tommy Lee called in to talk about tonight’s finale of his NBC reality series, “Tommy Lee Goes to College.” Howard told Tommy he loves the show because it shows Tommy’s sweet side. He explained that unlike “Breaking Bonaduce,” which focuses exclusively on Danny’s wacky behavior, “Tommy Lee Goes to College” presents Tommy struggling to do well in his college courses and in the marching band in which he’s a drummer. Tommy admitted that he has a new-found respect for anyone who is able to finish college after getting a taste of what that kind of life is actually like.

Earlier this year, Howard had Motley Crüe, a band for which Tommy is the drummer, on the show. However, Tommy didn’t appear with his band mates because he claimed he was sick. Later that same day, though, Tommy was on another radio show saying that the real reason he didn’t come by the studio that morning was because he was done with Howard. After playing a clip from that interview, Tommy told Howard that off the air the two of them are buddies, but that on the air all Howard does is ask personal questions about his former wife, Pam Anderson, and other non-music topics. Howard commented that he delves into those topics during the show because he wants to make his guests interesting. Artie added that people tune in to hear interviews that they can’t get anywhere else. Howard assured Tommy he likes having him as a guest. However, Howard wondered why Tommy would even want to appear on the show if he hates him so much. Tommy apologized for the remarks he made about Howard and the show. Robin pointed out that it didn’t even seem like Tommy knew for sure what his problems with the show were exactly. Given this, Howard instructed Tommy to take some of the experience he got at college and write him a position statement about what Tommy really thinks of him and mail it in.