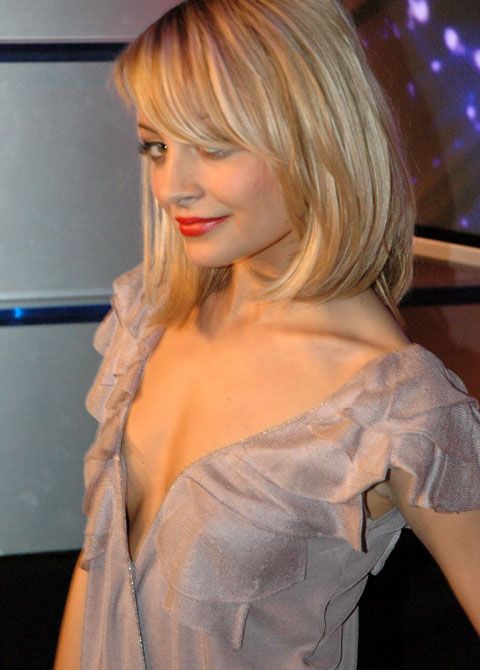 “Simple Life” star and “That’s Hot” co-coiner Nicole Richie came in to promote the new season of “The Simple Life” on FOX. Howard immediately told her she looked amazing and looked like she lost a lot of weight – a lot more than the 10 pounds she claimed to have lost. Howard said he thought she was now officially hotter than Paris Hilton and he’d rather do her than Paris, (although he added he would have done Nicole when she was chubby too).

Howard asked her about the rumors that she and Paris were no longer friends, but Nicole denied them all saying they get along great. Howard had heard Nicole was mad at Paris for allegedly using the “N” word, but Nicole said she wasn’t and that was a bogus story anyway. Nicole revealed that she is an A-cup and said she loves having small boobs because she doesn’t have to wear bras. Howard kept telling her how sexy she looked and said he just wanted to get her alone to see what she looked like naked. She asked Howard how long he lasted in bed and Howard said it depends. With some girls he can last for awhile and with others, it’s over in 2 seconds no matter what. Nicole thought it would make a girl feel bad if Howard lasted a long time because it might make her think he wasn’t turned on. Howard said he never even thought about it that way and if he does last long it doesn’t mean he’s not turned on. Nicole said if both she and Howard were single, she’d definitely have sex with him and she’s not kidding. However, she’d be insulted if he lasted long with her. Howard said to give him three times to get it out of his system and then he’d last a long time. He told her they could lie in bed together and make fun of Paris.

A few callers had some sex questions for Nicole Richie. One caller asked her if penis size was important. She thought about it for a minute and then said as long as it’s thick, that’s all that matters to her. She doesn’t like thin ones. Another caller wanted to know how long a guy has to last in bed with her for it to be good. Nicole said at least five minutes. Gary revealed that Nicole’s long term boyfriend was in the green room, but Nicole didn’t want him to come on the air. His name is Adam Goldstein and he’s a club DJ. Artie actually heard him at the Hard Rock Hotel in Las Vegas once and said he’s really good. Howard joked that Nicole probably didn’t want him in the studio because she’s going to break up with him soon, but she denied that. She said they’re living together and are very happy. She’s never had a threesome and doesn’t plan on having one any time soon. She said she’s not against the idea of having sex with a girl, it’s just not something she’s interested in right now and doesn’t know if she ever will be. Nicole did say she’s working on a record album right now, but didn’t want to sing in the studio. She said she played the piano and cello though, so Howard asked her to play something on the keyboard. She got up to play some classical music and she ended up standing on the hidden scale in the studio. Howard quickly said he bet she’s less than 100 pounds and he was right! She weighed in at 97 pounds, with her shoes on! Nicole couldn’t believe she was standing on a hidden scale and thought it was really funny.