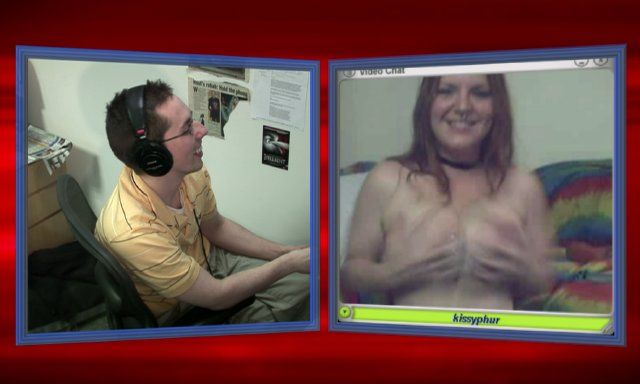 As promised yesterday, Howard arranged for JD to have a phone sex session with his favorite Webcam girl, Kissyphur, this morning. To make JD as comfortable as possible for his one-on-one session, Kissyphur, Howard announced that JD was in another room with a wireless mic. Howard also promised JD that he’d be quiet throughout his time with Kissyphur, who was linked to the show on her cam through monitors.

JD began his conversation with Kissyphur by asking, “Are you ready to be a dirty whore for me?” After getting her to disrobe and spank herself, JD then instructed Kissyphur to suck on one of her toys while pretending it was him. Although JD demanded Kissyphur insert toys in both of her other orifices, Howard noted that he didn’t think JD was getting into it enough. JD responded that he’s usually more animated when he talks to Kissyphur, but that he was nervous about doing it on the air. When JD next said that he usually just has Kissyphur suck on toys, Artie commented that such an act doesn’t really do much for him.

Because JD was disappointing, Howard took over for him. Howard first told Kissyphur to do 10 sit ups,and then to take off her boots and socks. Howard proceeded to ask Kissyphur about her first lesbian experience, while listeners, including the Rev. Bob Levy, called in to boss her around themselves.

After Kissyphur hung up, JD claimed that he couldn’t have one of his normal phone-sex conversations with her because of the cameras on him and the fact that millions of people were listening. JD also pointed out that he’s not “Mr. Performer” like everyone else on the show and is quiet and reserved. While Robin commented that JD’s performance was “sad,” Artie mentioned that it was even more depressing because the show had racked up a $4,000 phone sex bill this morning.