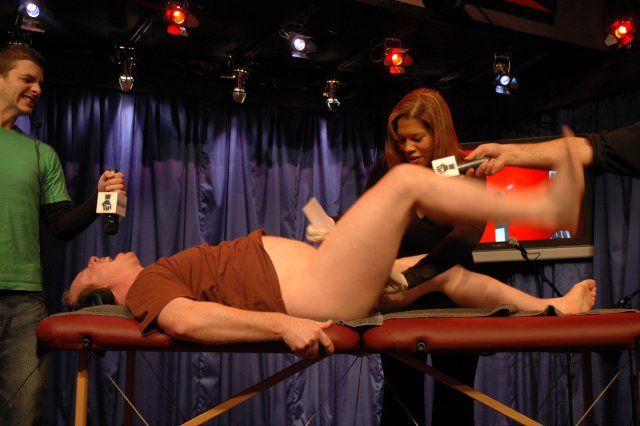 As Nora was cleaning Richard’s “area,” she pointed out that, although Richard was smaller than most of her clients, he still wasn’t bad. Nora then applied antiseptic to Richard before putting wax on his pubic area. Richard noted that the sensation of having the wax on him was “weird,” and, as he was saying, Nora ripped off a patch of hair. Richard began screaming because of the pain commenting that he didn’t realize Nora was ready to begin the procedure. After Richard admitted that the pain he felt after the first strip of hair was removed was a 10, Gary pointed out that Richard was bleeding when the second patch was taken off. Because of Richard’s yells and the fact that Nora was about to wax his shaft, Howard asked him if he wanted to call the whole thing off. However, Richard responded that he wouldn’t like the way having only part of his pubic hair removed looked, so, despite the pain, he insisted he wanted to continue. Nora added that Richard was handling the pain better than many other men she had waxed. Richard announced that the worst feeling during the procedure was when Nora was just about ready to pull off the wax. Gary reported that Richard was bleeding as Nora began preparing to work on his “taint.” Gary also pointed out, though, that Richard was so hairless that his “balls were stuck to side of his legs.” Nora then noted that she still had to remove hair from both the bottom of Richard’s testicles and the side of his penis. After Nora was done with this region of his body, Richard responded that the pain he felt was the worst yet.