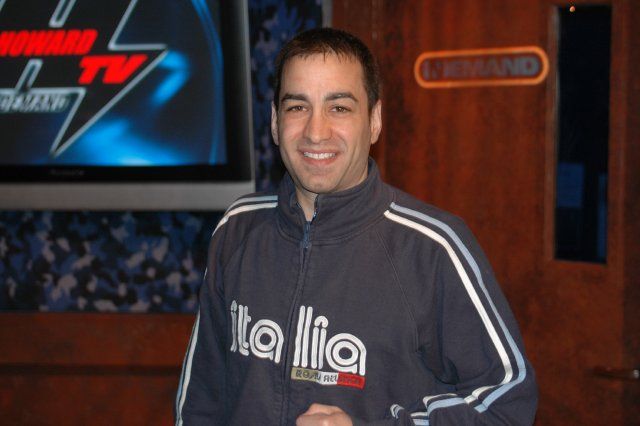 Comedian and former show intern, Mitch Fatel, came into the studio to talk about his career. As Mitch was settling in, Howard pointed out that he’s “always proud” when his interns do well, because it makes him feel like he played a part in launching their careers. Mitch then noted the compliments Howard has given him on the air over the years have meant a great deal to him and, when he first started listening to the show at 15, Howard instantly became a hero to him.

Howard said he had heard Mitch was mad at the show, an accusation Mitch denied. Mitch explained he put off being a guest on Howard’s program because he wanted to wait until he became a successful comedian and he felt like he had finally reached that point in his career.

Howard went on to say he visited Mitch’s Website yesterday and noticed a “Tonight Show” clip of him asking celebrities “goofy questions” at this year’s Grammys. Howard commented he didn’t like the way Jay seemed to be “talking down” to Mitch. Mitch responded that Jay’s been “very good” to him.

Put In His Place

Although Mitch said he didn’t have a problem with the show, he couldn’t say the same thing about Fred. Mitch recalled that one of his jobs as an intern was to type up the show log every day and when he got mad at Fred he would he write “time bombs” – like “I hope Fred’s dead by now” – years in advance into the log.

Mitch recalled one incident in particular involving an appearance Milton Berle made years ago on the program. Mitch remembered that Milton had said a lot of really great things about Howard during the interview and he thought it would make for a good opening for the show.

However, after Mitch pulled the clip and produced the bit, he approached Fred with it and Fred “just stared” at him, questioning what made the tape so special. Because of Fred’s reaction, Mitch acknowledged that he started believing the clip wasn’t any good. Mitch went on to say that, months later, he was helping to clean out an office, and the Milton tape was found and played.

When Howard commented how “brilliant” the clip was, Fred replied he felt the same way and that he remembered preparing the tape, but didn’t know what happened to it. Mitch then said that, because Fred ignored him when he took some initiative, that he relegated himself to going back to just cleaning Howard’s potatoes for lunch everyday.

After hearing Mitch’s recollection, Fred responded that, although he thought the story “got better” since it first happened 20 years ago, he apologized for the way he treated Mitch. Fred also admitted that he used to “torture” interns, but he thinks he’s gotten much nicer as he’s gotten older.

Gary recalled a time when Mitch got mad at him as well. He explained that Mitch informed had him he wanted to be a standup comedian, so he asked Mitch to tell him his best joke.

After hearing the joke, Gary advised Mitch “not to quit his day job.” It wasn’t until later that Gary found out Mitch was truly upset by his remark, saying that he wasn’t actually evaluating his comedy with it, but was just giving him a hard time instead. Gary then brought up the time he and Mitch went to a “Comic Relief” event in the 1980s.

Mitch asked Norman Lear, who had just won a lifetime achievement award, if he thought Fox had anything to do with the death of Joan Rivers’ husband, Edgar Rosenberg. Gary recalled that Norman “glared” at Mitch before repeating, “Oh my god.”

In fact, Gary added that Norman was so taken aback by the question that he addressed it again later while dealing with another reporter’s questions.

Eye On the Prize

Mitch said he got a jobs as a waiter at an all-night diner and at a cappuccino place after working for Howard and that both jobs motivated him to keep working toward his goal of becoming a standup, even though he admitted that Gary’s recommendation that he not quit his day job was always in the back of his mind.

Mitch said that he’s been living off his comedy career for the past decade and he’s gotten a number of girls during that time.

However, Mitch added he discovered that most of the women only liked him because they thought he was funny, but they lost interest in him once they discovered his offstage personality wasn’t always the same as his onstage one.

Mitch then mentioned that his current girlfriend is 19 years old and her parents liked him at first, even though he’s 38.

Mitch noted, though, that the girl’s mother started giving him a hard time recently because he posted a picture of him signing a woman’s breasts on his Website.