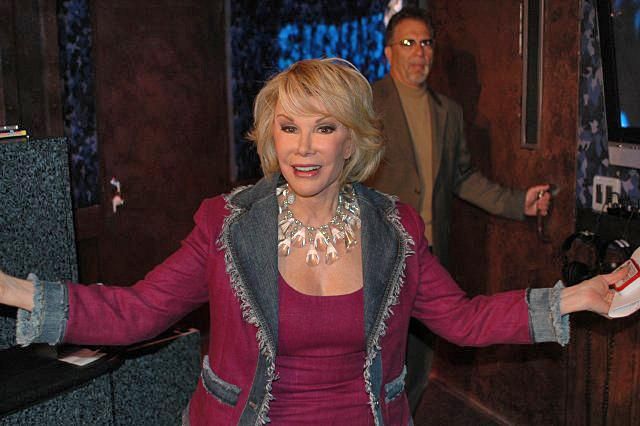 When Joan Rivers came into the studio, Howard told her she looked “glamorous,” adding he expected her to “fall apart” every time he saw her because of all the plastic surgery she’d had. Howard then told Joan she should stop working and relax, but she replied that wasn’t her style. Joan went on to say she was becoming friends with England’s royal family, and claimed she found Prince Charles “charming” when they had dinner together earlier this year.

Joan said she knew Mel Gibson was an anti-Semite before his recent controversial remarks, which led Howard to take a call from “Arnold Schwarzenegger,” who referred to Mel’s remarks as “not a big deal.” After Arnold called Mel “a great friend,” Joan pointed out that, if had Mel used the n-word instead of insulting Jewish people, he would never have been forgiven. However, Arnold told Joan that wasn’t the case, because the n-word didn’t bother him either, to which she replied, “If this really is Arnold, I can’t believe it.”

When Howard later revealed the caller wasn’t actually Arnold, Joan told him she didn’t think it was, but remained nice to him in case she ever saw him on a red carpet in the future.

Joan reported she recently spent a weekend camping with her 5-year-old grandson, and planned on taking him bowling as well. Joan also said one of her ex-boyfriends, who she noted was ill, contacted her to have dinner with her, but his current girlfriend wouldn’t allow them to get together. Joan then said she was going to be involved with a program just like “The View,” only with four gay male hosts. Joan added former New Jersey Governor Jim McGreevey was one of the people she wanted involved with the show.

Joan said she was doing her red carpet show on the TV Guide Channel this Sunday before the Emmys. Joan then mentioned Melissa, her daughter and partner on the broadcast, was dating a man she wanted her to marry. Joan added, though, that Melissa went through such a messy divorce recently that she didn’t think she and her boyfriend would be getting engaged anytime soon.

Before Joan left, Gary announced Jon Hein would be hosting a pre-red carpet special of his own for the TV Guide Channel, which Jon told Howard was part of his deal when he sold Jump the Shark to the company. Richard then came into the studio to play the “Who’s Older?” game, which revealed Joan was older than Alcatraz, the Hoover Dam and Flash Gordon.