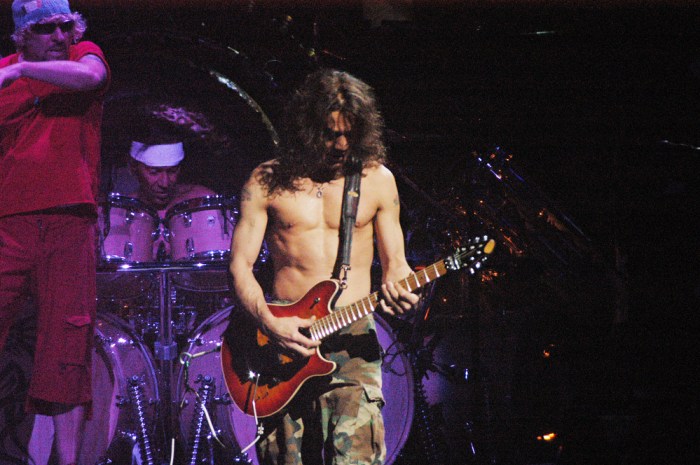 Eddie Van Halen called in as promised, and announced he was “cancer free” after being diagnosed with the disease last year. Eddie went on to say he and another man started a lab in Long Island to help people with cancer, and that they came up with a drug that got rid of the cancer he had on his tongue. Although Howard wondered what exactly was in the drug he created, Eddie responded he couldn’t give that information out. Eddie then said he didn’t quit smoking even when he had cancer, adding he thought he got the disease from the metal guitar pick he used to use.

When Howard mentioned David Lee Roth, Eddie acknowledged he wouldn’t rule out a possible reunion with either him or Van Halen’s former bassist, Michael Anthony, who Eddie said was on the road with Sammy Hagar billing themselves as “half of Van Halen.” Eddie then brought up that he wrote two songs for an X-rated movie, “Sacred Sin,” as well as its R-rated counterpart, “Rise.” Eddie next said he had been dating his current girlfriend, Janey, for two months, and that they met at a press conference. Eddie also mentioned his 15-year-old son, Wolfgang, was “dangerous” because of his musical talent on the drums and the bass.

Howard got Michael Ninn, the director of “Sacred Sin” and “Rise,” on the line, and found out the movies were filmed at Eddie’s house, and cost $250,000 to make. Eddie then explained the movies as being about the battle of “good and evil,” and insisted they were legitimate movies that just happened to include sex.

Eddie said he predicted David Lee Roth would last four months on the radio before he went on the air in January, and also mentioned he felt David took the job because he needed the money. This led Gary to ask if David hadn’t earned enough money through Van Halen to live comfortably for the rest of his life, but Eddie replied he didn’t think he did. Eddie proceeded to say the reason he was so successful was not only because he co-wrote the Van Halen songs, but also because he invested his money wisely and never stopped releasing music.