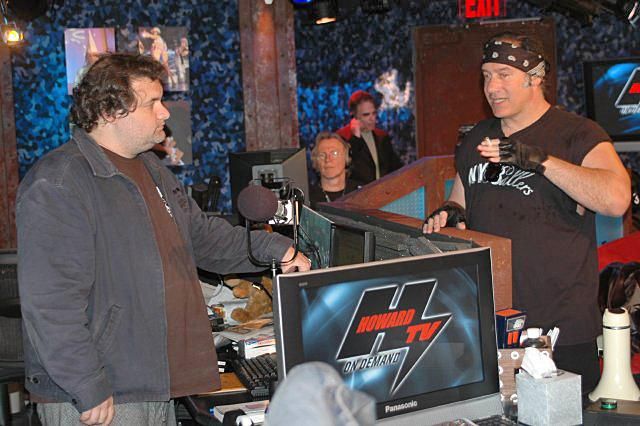 Andrew Dice Clay came into the studio to address his latest controversy with Artie. As Dice walked in, he kissed Benjy, or BBB as Dice calls him, and admitted he once thought about getting a hair transplant, but decided against it because he wasn’t sure where his new hair would come from. Howard then commented Dice and Artie got into an argument after they did a standup show earlier this year, because Artie didn’t get paid for the performance the night of the show as he would’ve liked. Dice responded he’d arrange for Artie to get paid the night of their upcoming show on November 4, so there wouldn’t be such a problem in the future. Dice said the only way he wouldn’t pay Artie in full on November 4 was if they decided to hire prostitutes that night, which led to a discussion about sex. Although Dice wouldn’t talk about the size of his penis, he assured Howard he “annihilated the target” whenever he was with a woman, while also claiming he no longer had one-night stands.

Howard turned the conversation back to Dice’s standup show with Artie, explaining Dice had worked out a deal to broadcast the November 4 show live on Howard 101, but that he never cleared this with Artie. Given this, Howard said Artie wouldn’t agree to the simulcast because he wanted more time to work on his new act before it aired to such a large audience. Dice then said he didn’t think he was in the wrong because he and Artie had talked about having one of their shows broadcast on the air, which Artie acknowledged was true, but pointed out that they had not discussed airing this show in particular.

Dice explained he thought he and Artie made a good team, which was why he wanted their performance to air next month. However, Artie again said he didn’t think his new material was “broadcast ready,” but Dice insisted he found his routine at their last show so good that he was confident whatever he did would be good enough. Dice added he still planned on having his performance air on November 4, but Artie said his wouldn’t, although he promised to go through with his act that night.

Dice proceeded to bring in his Uncle Lee, who turned out to be a friend and fan of both him and Howard. Lee then praised everyone on the show, and Howard told Lee he “lit up the room” because of the kind things he had to say.

Dice announced he was planning on doing a 20-city tour, and he wondered if Artie wanted to perform with him. Artie noted, though, that he couldn’t commit to such a tour at the moment, saying he wasn’t as interested as Dice such a tour. Artie then noted he was doing a gig on New Year’s Eve in Philadelphia, and the 3,500 seat theatre sold out in one day.

Although Artie insisted he didn’t want to broadcast his new material on November 4, he did promise Dice he’d think about it. Dice then said if Artie decided to go through with the broadcast, he’d pay him an extra $1,000 for his efforts.