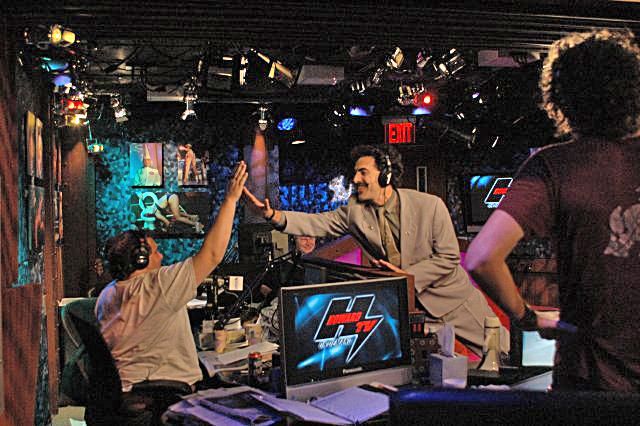 When Borat came into the studio, Howard congratulated him on his new movie, “Borat,” which opens on Friday. Borat then noticed that Robin was “kept in a cage” before referring to her as “a chocolate face.” Borat went on to explain he’d met a number of black people in Kazakhstan, and that he enjoyed Michael Jackson and his “new song,” “Beat It.” This led Borat to claim he considered Michael “a lady’s man” because of the song, “Billie Jean,” but Howard told him that feeling wasn’t the consensus in America. Borat also said touching children in Kazakhstan was illegal most of the time, with the one exception being a certain holiday that allowed such behavior. 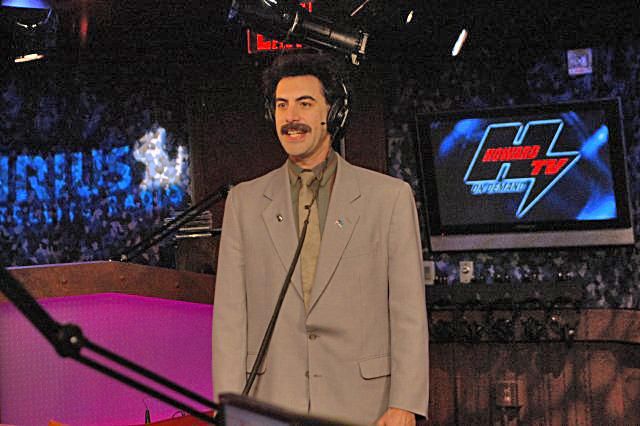 Howard asked Borat about his ability to recognize Jewish people, and he replied he could spot them because they “wore gloves to hide their claws” and usually walked bent over, adding they could also “change shapes” without much trouble. Given this, Howard announced he was going to show Borat pictures of celebrities, and he had to decide if they were Jewish or not.

After Borat correctly identified Reese Witherspoon as not being Jewish and Pink as being Jewish, he incorrectly guessed that Kate Hudson wasn’t Jewish. Borat went on to suggest people should look for “horns” when trying to identify Jews, or check to see if they were “counting money.” Borat added the people in Kazakhstan supported the recent remarks made by “Melvin Gibson” about Jewish people.

When Howard next asked Borat what he’d do if he ever accidentally had sex with a Jewish woman, he responded the jar of “gypsy tears” he kept around his neck would protect him from diseases he felt Jewish people carried. Borat claimed he was only the fourth-biggest star to come out of Kazakhstan, and quickly added he liked it when women shaved their private parts.

As Robin explained she didn’t completely shave and instead had a “landing strip,” Borat admitted he didn’t want to have sex with her, but that, because she looked “cuddly,” he’d like to be married to her. Borat next said he was relieved to learn Robin had no history of retardation in her family, explaining his brother was retarded and “dangerous” because of it. Borat then claimed he used a piece of leather his father and 12 brothers also used as protection when he had sex.

Howard wondered how much money Borat thought his movie would make, and he responded he didn’t know. Borat did say, however, that his film was already successful in Kazakhstan, noting it recently knocked “King Kong” out of the top spot at the box office there where he said it had been since it opened in 1932. Borat also said he went to a club called “The Cock” last night, and that the one “woman” in the place went back to his hotel with him, and that, when he woke up today, he noticed his anus was “hanging open.” Howard went on to take calls for Borat, but, because of the language barrier between him and the listeners, he repeatedly said he didn’t understand what the callers were asking him.