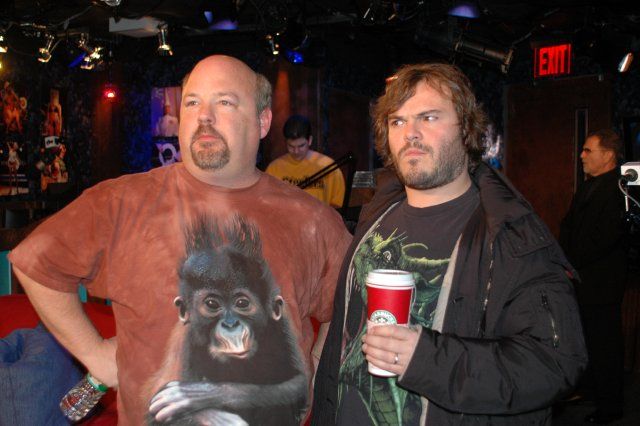 Howard had the Tenacious D band mates, Jack Black and Kyle Gass, into the studio, and immediately played the remarks Andy Dick made about them last night on “The Shit Show.” After hearing the clip, Jack pointed out he thought the funniest parts of “The Pick of Destiny” were R-rated, and agreed with Andy’s assertion that the trailer didn’t do the movie justice. Howard said he had an advanced copy of “The Pick of Destiny,” and referred to the opening 30 minutes of it as one of the best movie beginnings he’d ever seen. Jack then mentioned he was a fan of Andy’s so his compliments were encouraging, but also acknowledged he felt the timing of the release of “The Pick of Destiny” wasn’t good because of how much press “Borat” had been getting.

Howard asked Kyle if it was difficult working with Jack seeing how successful his acting career was going, but he promised him it wasn’t. When Howard read that Jack made $12 million per picture, Jack laughed and reported he and Kyle were splitting $1 million for their roles in “The Pick of Destiny.” However, Jack noted the creative control he and Kyle were given made up for the cut in pay he took to make it, admitting he thought he had “sold out” after starring in “Shallow Hal.”

Howard then brought up what he had been discussing earlier, which was that, while Tenacious D was a funny band, he figured both Jack and Kyle really wanted to be rock stars. Kyle replied there was some truth to that, and Jack acknowledged he “loved to rock” whenever he could.

Kyle explained he met Jack through a theatre company at their alma mater, UCLA, even though he pointed out they didn’t attend the school at the same time. Jack then reported he tried out for “Saturday Night Live” years ago, but he turned down an offer the show made because he didn’t think his humor matched with that of the program. Because Howard was curious what other projects Jack had declined in his career, Howard claimed he’d reveal a recent project he said no to in return, but they decided against it. Jack went on to recall turning down what he called his first “big break” in “High Fidelity” three times before finally agreeing to be in it, and also acknowledged he felt some of “Shallow Hal” was funny, but that his major problems with being in it centered on the serious moments and how he handled them.