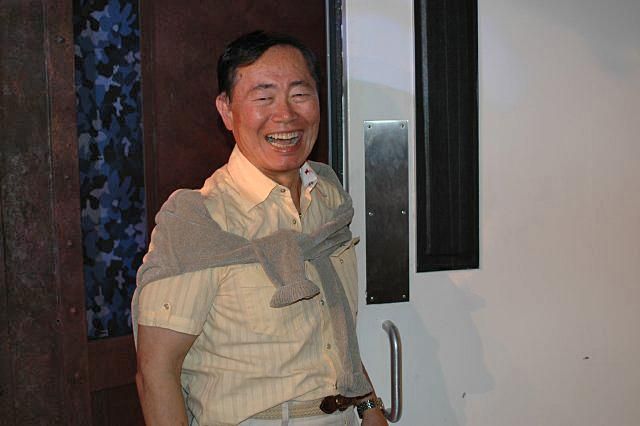 Howard got a woman, Alyssa, on the line to play a game of Two Truths and a Lie with George Takei, where the following three statements were read about George, and she had to guess which one wasn’t true:

(1) I once vomited while giving oral sex to a man (2) I once used a racial slur toward a Jewish co-star (3) My first sexual experience was with my camp counselor.

While Howard and Artie picked the camp story, Robin and Fred went with the first one, and Alyssa chose the racial-slur report, which Sal revealed was the correct answer. Upon hearing that, Howard said he didn’t think many Asians went to summer camp, but George told him that wasn’t the case.

George proceeded to recall that he was 13 at the time, and he was with “an experienced” counselor who was in his late-teens. When George recalled his counselor’s “blond forearm,” Artie insisted he was still comfortable sitting next to him. George went on to say his counselor came to his cabin while he was alone, and the two began kissing before exchanging “hand jobs.”

George then said the vomiting incident occurred while he was “backpacking through Europe,” (or as Artie phrased it; “fudge-packing through Europe”) and met a man at a “taverna.” As George was telling his story, Artie wondered if he thought he had experienced “the natural reaction” to having a penis in his mouth, and if he called his dad to announce “the good news” – namely that he wasn’t gay. George responded, though, that the vomiting had nothing to do with his homosexuality, but was instead a result of all the drinking he’d done during the day.

Howard took another call from a man named Jim who played a second round of the game with these being the choices: (1) I once allowed a complete stranger in a bar to see my genitals (2) I once experimented with a candlestick in my rectum (3) I once came in my pants while holding onto a man on the back of a motorcycle.

After Fred chose the motorcycle story, Jim went with Howard, Artie and Robin, who all picked the second story as the fake, which George said was the correct answer. George then explained he was at a bar in Scotland at the time the genitals story took place, and he was wearing a kilt and no underwear.

George added one of the men at the bar claimed he didn’t know how to wear a kilt the proper Scottish way, but, when he lifted it, he found out he did. George next remembered the motorcycle incident occurred when he was in summer school in England and, because of his close proximity to the man driving and the motorcycle was vibrating, he finished in his pants.

However, George acknowledged the man didn’t know what had happened, and that he didn’t want to tell him, especially because the driver was straight.