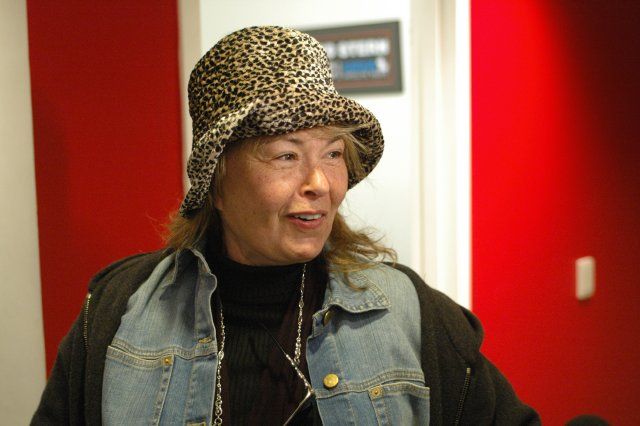 Comedienne, Roseanne Barr stopped in and began her interview on the topic of weight loss. Roseanne explained she thought dealing with weight was mostly mental because of the amount of time heavy people spend thinking about not eating, admitting she had put on a few pounds since she hit her lowest weight a while back.

Howard then brought up the claim made by Tom Arnold that Roseanne didn’t give him any money following their divorce, but she responded that she was “over” anything Tom said. Roseanne added she wished Tom “the best,” but also noted she didn’t feel like “burying the hatchet” with him because she didn’t care anymore.

Roseanne went on to report she was still getting “20 cents for every dollar” that “Roseanne” made on DVD, which she acknowledged was a total she wished was more.

Roseanne said she didn’t know Richard Jeni, but did find the news of his suicide to be “awful.” Roseanne added she’d heard through a friend of Richard’s that he was depressed, adding that she knew firsthand how crippling the condition was. Roseanne also noted, though, that she was now completely off antidepressants and was doing well mentally. Roseanne proceeded to say she was into Kabbalah, and that she did it because she didn’t want “to go to hell,” not to meet celebrities at the sessions.

When Howard started asking about Roseanne’s sex life, she replied she didn’t want to talk about it because she didn’t want her grandchildren hearing such stories. Roseanne then acknowledged she liked getting older, adding that she was disappointed with the way some of her fellow baby boomers turned out.

Any Help She Can Give

Roseanne announced she wanted to start a foundation for children, and, as part of the process, she got to meet President Bush. Although Roseanne admitted she wasn’t a fan of the president’s, she said she wanted to meet him so she could “pass some energy” to him.

Roseanne then touched Howard’s hand to demonstrate how she was able to pass energy to others, but he responded that he felt she stole his energy, which Roseanne noted could also be true. Roseanne then recalled how she told President Bush that she prayed for him every night, and that he replied, “Well, aren’t you a nice girl,” even though she was 50 years old at the time

Howard played the infamous clip of Roseanne singing “The Star Spangled Banner” at a baseball game 15 years ago, which he described as “brilliant.”

Roseanne then credited Johnny Carson for her initial success, remembering she was booked to a comedy tour the day after her debut appearance on “The Tonight Show.” Rosanne went on to admit there were times she regretted divorcing her first husband, a postal worker, but added they were still friends with each other.

Death Is Not the End

Roseanne reported she had money, but wasn’t living luxuriously. Roseanne explained she didn’t think anyone needed more than $100 million nor did they need a home bigger than 6,000 square feet. She also mentioned she felt Oprah Winfrey was causing trouble in South Africa over the school she was building there because, while it did help some, it also excluded many children.

Roseanne then commented she thought people should give “a third” of their money to charity, noting she saw people living in trash cans while others resided in mansions on a daily basis. This led Roseanne to say she believed people should be generous because she thought “everyone would be judged.”