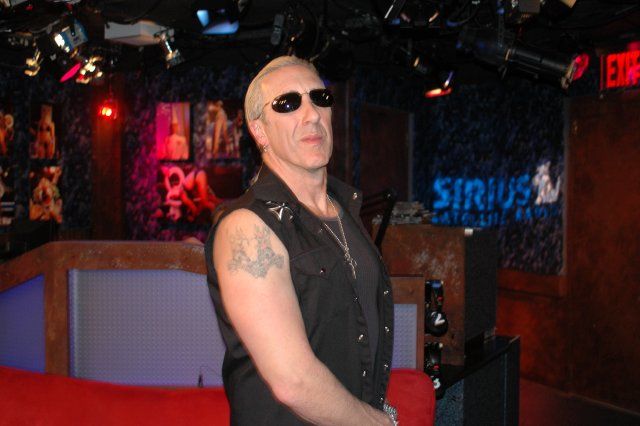 When Dee Snider stopped in, the rocker reported Twisted Sister was back together, and that they recorded a Christmas album last year that was “a hit.” Dee also said the band was set to perform at a festival called, “Rocklahoma,” which was a reunion of bands from the 1980s, and that Cinderella, Poison and Dokken were just some of the other groups scheduled to play as well.

After Dee talked about how he felt many of his fellow ’80s rockers had aged well, Howard brought up a video he’d seen of Dee on You Tube, in which a man came up to him in England and punched him, only to be “beaten” in return by Dee. While the video played, Dee admitted it was, in fact, him in the footage, and explained he used to get animosity from people based solely on his look at the time.

In It Until the End

Howard brought up that Dee recently renewed his wedding vows with his wife, Suzette, which he acknowledged was true. Dee noted he and Suzette have been married for 25 years, and that Penn Jillette performed the ceremony in front of a crowd at the end of a Twisted Sister concert. Dee then said being married was “easy” for him because he loved Suzette, and that he has never even contemplated being with another woman since he met her.

Dee then mentioned he was once again participating in Bikers for Babies this weekend, explaining the event raised money for the March of Dimes. Dee also said that his son, Jesse’s band was playing as part of the benefit.

A caller asked Dee if there was any plan to make more horror movies, adding he felt he was “an innovator” with “Strangeland,” which Dee wrote. Dee responded that there were talks about making a sequel to “Strangeland,” and that he’d like to do more movie work as well.

Where the Audience Isn’t Safe

After some more calls, Howard remembered the time he and Dee played a song on a stage in England years ago, and how Dee attacked a man in the crowd who’d thrown a bottle at him during the performance. Howard added that, what impressed him the most about the incident was that Dee was able to get back onstage in time for his next verse.

Howard went on to take a call from Sour Shoes, who started his performance by playing a song by Air Supply before launching into Twisted Sister’s “I Wanna Rock” and “We’re Not Gonna Take It,” with the latter being sung in his Scott Ferrall voice.Richard then came into the studio to say he was going to be attending the “Rocklahoma” show, and Dee acknowledged the band was making “in the six figures” for their participation in it.