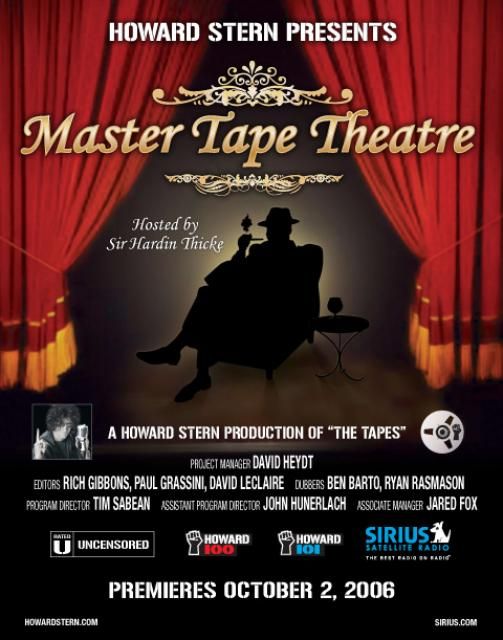 Howard began today playing a recent clip of Dr. Phil on “The Late Late Show with Craig Ferguson,” talking about how he agreed to give interviews the night of the Virginia Tech massacre even though he’d had surgery earlier the same day.

After Howard and Artie criticized Dr. Phil for being self important, Howard played a clip from last Friday’s “Master Tape Theatre,” which originally aired in 1997. In it, Howard discussed an article he’d read about satellite radio and how he thought it was the future of broadcasting, despite the fact it was still in its infancy at the time.

Once the tape was done, Robin made a comment about the Mets taking two games from the Yankees in this weekend’s Subway Series, which led Gary to come into the studio to talk about how he felt Tyler Clippard, yesterday’s winning pitcher for the Yankees, looked like he was “in high school.”

Following the discussion, Artie acknowledged the Yankees’ pitching staff was struggling, but also insisted the season was still “early.”

Ronnie’s Having a Petcock

Howard mentioned that he and Beth went to dinner over the weekend, and, despite the fact that it was really cold that night, his limo didn’t have any heat. Howard then said his driver that night informed him that Ronnie the Limo Driver needed to switch a converter in the car that allowed heat to be dispensed, but that he hadn’t done it.

Ronnie proceeded to enter to say the problem with the limo wasn’t his fault, and was instead that of its maker, who had to install something called a petcock valve, that lets him switch between heating and cooling, in the engine compartment to fix a problem they had with the air conditioning last year.

Howard continued to blame Ronnie though, explaining that his limo was the only vehicle he’d ever heard of that didn’t have both air conditioning and heat. Howard went on to threaten to name the company Ronnie purchased the limo from on the air if the heating system wasn’t fixed, and Ronnie promised him that he’d take care of it.

Ralph then called in to say the car’s heating system was Ronnie’s fault, and Howard pointed out he didn’t think Dominic Barbara had the same problem with his limo. Doug Goodstein then came in to report he’d found a limo on eBay that had both heat and air conditioning…for $400, while Howard added he’d been in some rundown limos in his life, but they all had both air conditioning and heat.

When Howard took calls on the topic, one of the callers said he couldn’t believe how good yesterday’s episode of “The Sopranos” was, and Ralph referred to it as “one of the best episodes ever.” After Robin and Artie agreed with Ralph’s assessment,

Howard called David Chase, the show’s creator, “a genius,” while Artie also noted that there were “immediate payoffs” last night, including the way Tony “dealt” with the man who harassed Meadow in a restaurant.

Dominic Barbara then called in to back up Howard’s guess about his limo, saying that his vehicle had both heat and air conditioning anytime he wanted.