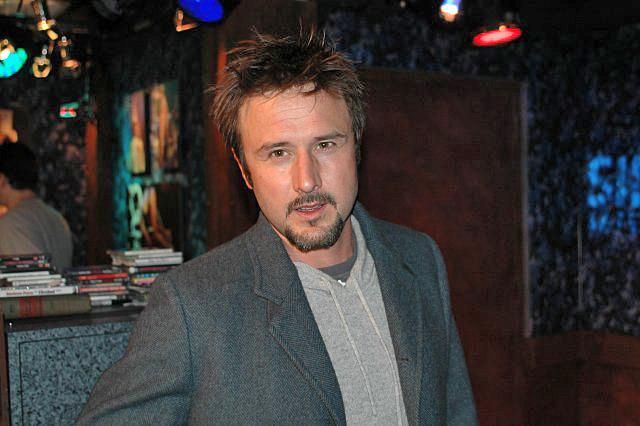 Howard introduced his first guest, David Arquette, as “having the best life” of any man he knew.

As soon as David sat down, Howard asked him if his wife, Courtney Cox, “had to bring Jennifer Aniston” with them whenever they went on vacation, which caused David to laugh and say Jennifer’s divorce from Brad Pitt was “sad.” David added he “loved” Brad, but also said he knew he “did some things” to his friend, Jennifer. Because of David’s demeanor, Howard asked him if he smoked marijuana, and David responded by laughing.

When Howard asked if David liked Vince Vaughn, Jennifer’s boyfriend following her divorce, he again began laughing. David admitted, though, that he was “surprised” to find out Brad was having an affair with Angelina Jolie.

This led Howard to explain he felt David’s life was perfect not only because he married Courtney, who he referred to as “a piece of ass” with money, but also because of his celebrity friends.

David went on to say he wasn’t a big gossiper, but acknowledged he sometimes liked reading tabloids. David also commented that Jennifer was “the greatest girl” and that she wasn’t “all sad” about her divorce, even though the tabloids suggested otherwise. Despite his remarks, Howard gave his opinion about Jennifer, and how he thought she seemed too “uptight” for him.

However, David called Jennifer “private,” and said that she was fun to be around in her personal life. David then reported he went on vacation in Mexico recently, and that he met up with celebrities like Kevin James, Adam Sandler and Sheryl Crow who happened to be there as well.

A Boy Becomes a Man

Upon hearing that, Howard wondered if David was “that good looking,” and Robin assured him he was “cute” and that, until she saw him again today, she’d forgotten “how attractive he was.”

David talked about his personal life, including that his mother used to hit him, and that his sister, Alexis – who used to be his brother – was allowed to visit his child. Howard then reported he interviewed another of David’s sisters, Rosanna, last year before admitting he used to constantly pleasure himself to her. Howard then insisted that David videotape themselves explaining Aunt/Uncle Alexis to their child, but David could only laugh in reply.

David next acknowledged Courtney had a number of sex scenes in her latest show, “Dirt,” while also acknowledging the two of them waited “quite a while” before having sex again after their child was born. David then called the quiet times he was able to share with Courtney and their baby as his “favorite times,” and again laughed when Howard wondered if these times were ever interrupted by Jennifer Aniston calling to complain about her love life.

David also noted that his own show, “In Case of Emergency,” was airing its second episode tonight, and Howard noted it’d received “great” reviews in the New York newspapers