Wrestler Iron Sheik Stops By to Promote His New Show

Wrestler Iron Sheik Stops By to Promote His New Show 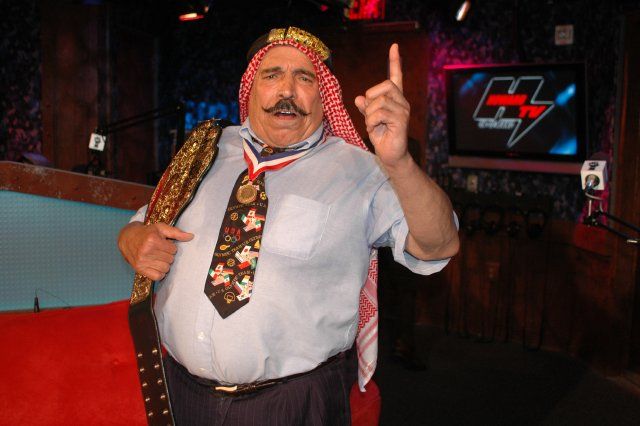 The Iron Sheik stopped by to promote his radio show, which will be airing tonight on Howard101, and Howard asked him why he was out of breath. The Sheik said something unintelligible involving “jabronis” and told Howard about touring with the Killers of Comedy. Howard asked the Sheik about some of his recent statements about Hulk Hogan, so the Sheik explained that Hogan is always nice to him in person and then never returns his calls.

Is Sheik a Terrorist Threat?

Howard wondered how the Iron Sheik could call people gay and then – in the next breath – threaten to f’ them in the ass, but the Sheik claimed that he was just giving people some “cheap heat.” The Sheik then noted that, should he ever carry out his threat, he would only use a beer bottle – never with his “ten-inch penis.” Howard asked the Sheik about his problems with airport security, so the Sheik explained that he wasn’t a terrorist threat, just excitable. Howard asked the Sheik how he convinced airport security that he wasn’t a terrorist, but the Sheik began a disjointed rant about Osama Bin Laden, Madison Square Garden, Rudy Giuliani, September 11th, and his American citizenship. “Hulk Hogan” called in, and the Sheik told him that he would f’ him in the ass with his “ten-inch c–k.” The Sheik then told the crew about his wife of 35 years, whom he described as a gold-digging Minnesota woman he met at the University of Michigan.

The Sheik warned the crew about the dangers of cocaine use, saying his past drug problems have left him broke. Howard wondered if the Sheik’s wife had a problem with his drug use, so the Sheik told “Mr. Howard” that they sleep in different rooms and haven’t had sex in “a couple years.” The Sheik added that he felt his wife was a gold-digger because their sex life stopped when his personal worth dropped below a million dollars. The Iron Sheik said he was a Shiite Muslim, so he can’t have sex with other women until he was divorced from his wife – which he had no plans to do. Howard asked the Sheik if he ever masturbated, so the Sheik claimed that he hasn’t beat off since he got married – he focuses on training when he gets “horny.” Robin questioned the Sheik about how he reconciles his drug and alcohol use with his religion, so the Sheik explained that he didn’t eat “that son-of-bitch pork” and was “sorry to my religious” for using alcohol.

“Randy ‘Macho Man’ Savage” called in, causing the Sheik screamed at him about his “ten inch cock” and began unbuttoning his pants to show it off. The Sheik explained that he hated Randy Savage because he once refused to buy an “expensive” hotdog for his wife. Howard used Macho Man’s drug history to bring up the Sheik’s crack use, so the Sheik explained that though crack gave him energy and power, he’s now managed to quit.

High Pitch Erik came in as “King Kong Bundy” to terrorize a breathless Iron Sheik, but the Sheik just thought “Bundy” looked like a “faggot.” The Sheik said he wouldn’t beat up “Bundy” out of respect for “Mr. Howard” but did threaten to beat him with his “ten inch c—k.” Howard remarked that he couldn’t believe that the Sheik’s wife was a gold-digger, but the Sheik only responded by shouting about the size of her rear.