On the Other Side of the Relationship Coin

The "Carpools" star sits down with Howard. 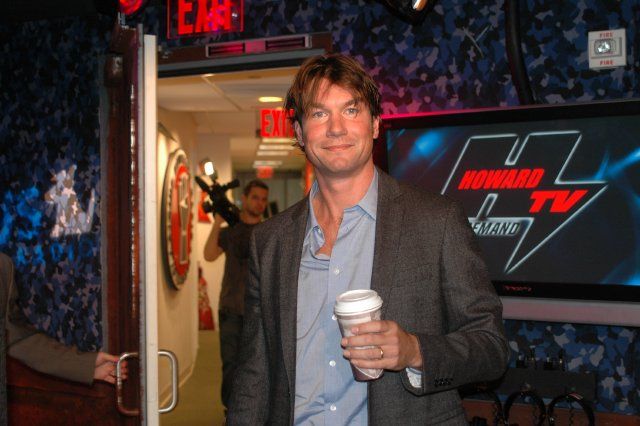 Jerry O’Connell stopped by to promote his new show, “Carpoolers,” and told the crew that the staff of his new show has nicknamed him “Stamos.” Jerry said he was in the studio today to act as a “bridge” between Howard and Rebecca [Romijn], as she’s still upset with him. Howard said that when a relationship splits and you’re friends with both people, it’s almost like you have to choose. Jerry added that Rebecca also disputes some of Howard’s claim about the infamous almost-girl-swap incident, but Howard countered that Rebecca and John were the ones who originally told the story on the air. Jerry said Rebecca mostly talks about Howard as “a great guy,” but she gets emotional when he makes fun of Jerry or talks about “that night.” Howard told Jerry that the things he’s said about him were “a joke, as if I was a jealous friend,” and agreed that he and Beth should go out to dinner with Jerry and Rebecca. Howard then ribbed Jerry about singing “You Saved The Best For Last” to Rebecca at their wedding.

Howard asked Jerry how he puts up with Rebecca’s demand that he watch football on mute, so Jerry explained that they went to couples counseling before they got married. Howard then went through some of Jerry’s sexual resume. Jerry denied cheating on Giuliana DiPandi with Ginger Spice, but admitted to dating both, as well as Estella Warren and Sarah Michelle Gellar. Jerry claimed he didn’t cheat on any of them but was unclear if any overlapped. Jerry noted that when he was growing up, his mother was Beetlejuice’s special ed teacher, and Beetle was such a good student, he did special work as Jerry’s mom’s “assistant.” Howard asked Jerry if he was cool with his brother’s season on “The Bachelor,” and Jerry explained that his brother was between projects at the time. Jerry speculated that “The Bachelor,” like “Rock of Love” or “I Love New York,” is an alcohol-fueled reality show.

Jerry told the crew that he and Rebecca watched John Stamos’ old show, “Jake In Progress,” and Rebecca really wanted it to do well. After their divorce, Rebecca worried about John’s ability to move on. Howard asked if Jerry was nervous when he first had sex with Rebecca, and Jerry admitted that he was. Howard then wondered how long Jerry had to wait until they had sex, but Jerry dodged the question.