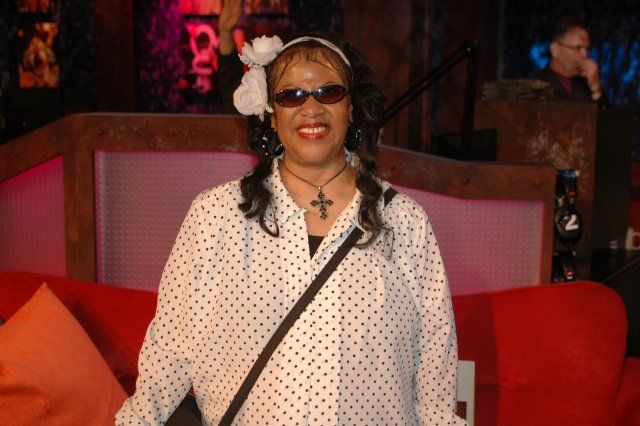 Crazy Alice stopped by (for the first time in seven years) to visit with the crew. Howard told Alice that she looked good and noticeably thinner, so Alice said she’d lost a little weight and has been enjoying her stay in NYC. Alice told Howard that she arrived in town early yesterday, and even though her hotel reservations were messed up, her trip was really smooth, adding that her dyslexia often made her angry. Alice then became angry with the wall in the studio that separated her from Artie and “my sweet Fred,” saying “this is not Berlin.” Howard asked Alice about her troubled youth, so Alice explained her light skin, drunk mother, and “Italian asshole” father caused her a lot of problems. Alice then told the crew that she lives off “disability” (though she claimed she didn’t know why or how), was on “medication,” and never graduated from high school.

Alice said dark-skinned black people tortured her when she was younger because of her light skin, causing fights that left her with scars “all over.” Alice then noted that she had light-brown nipples as well, not the dark, “raisin”-like ones most black women have. Howard told Alice that most people would classify her as a black person, so Alice began screaming about stereotypes and not considering herself either white or black. Alice reported that she was a virgin when she got married. Howard asked Alice what happened to her husband, but Alice said, “F’ him to hell,” noting that he would “manhandle” her. Alice told the crew that she hasn’t had sex since she divorced him in 1994. Alice then admitted that their son was “mild retarded” and lived in a group home because he developed “emotional problems” and would repeatedly run away from home.

Alice told Howard about her “evil” neighbors, and – out of nowhere – claimed that she’d punch any woman who “tries to touch me sexual.” Alice then took on the callers, naming each, in turn, “short-dick c@#t,” “faggot,” and “stanky psycho c@#t.” Howard asked Alice if she was angry with the callers or herself, so Alice explained that her heart was hurting. Ralph then called in and Alice told him he was a “green-toothed lizard faggot.”