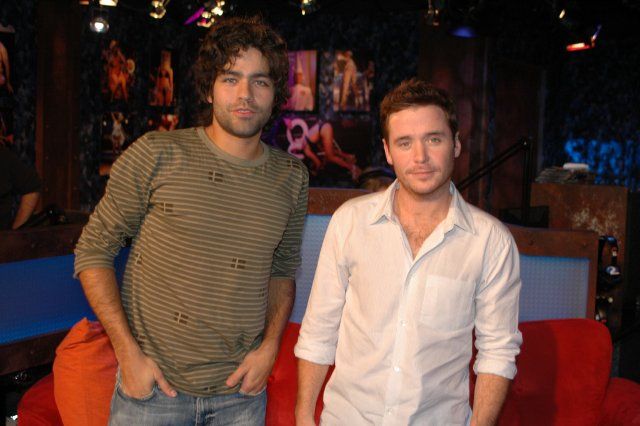 Adrian and Kevin came into the studio to promote the new “Entourage” coffee table book, and Adrian told everyone how to pronounce his last name. Howard remarked that he was glad that Adrian talks to him at the gym now, because it was awkward when they wouldn’t acknowledge each other. Adrian agreed, saying he was glad when Howard finally came over and formally introduced himself. Kevin then told the crew about witnessing the Kid Rock-Tommy Lee fight at the VMAs, but Adrian, who was sitting next to him, claimed he didn’t remember much of it because he was busy watching Alicia Keys perform. Howard then asked Kevin about some of his own fights, so Kevin admitted to punching both Brandon Davis and Chad Muska after they’d said bad things about his then-girlfriend, Nicki Hilton.

The Private Life of Adrian Grenier

Howard speculated that Adrian’s good looks must’ve given him a wild sex life, but Adrian claimed he was actually a “late bloomer” and nothing, as most fans expect, like “Vince,” his character on “Entourage.” Howard asked Adrian about his current girlfriend, so Adrian admitted that he’s been dating a model named Melissa Keller “off and on,” as they’ve had issues with infidelity. Howard then read a list of women (Kirsten Dunst, Britney Spears, Paris Hilton, and Melissa Joan Hart) that Adrian has supposedly slept with, but Adrian denied sleeping with any of them.

Adrian said he recently made a documentary, “Shot in the Dark,” about searching for his real father. Howard asked if the search was difficult, so Adrian explained that his father split when he was only six years old. Artie noted that he’d seen the movie and particularly enjoyed a moment where Adrian’s adoptive father becomes frustrated with Adrian’s search. Howard wanted to know where he could see the film, so Adrian said he’d send him a copy.

Howard then turned his attention to Kevin, who said he’s gone out a few times with Julianne Hough, the hot blonde (the race car driver’s partner) from “Dancing with the Stars.” Kevin claimed he was “actively pursuing” Julianne, and though he speaks with her every day, they have not gone any further than that. Howard was blown away that Kevin was dating Julianne and told him to take a photo of her to his father’s grave to “show” his dad how well he’s doing.

Behind the Scenes of ‘Entourage’

A caller claimed Robin was laughing giddily in Adrian’s presence, so Robin admitted that she was a big fan of “Entourage.” Another caller asked if Jeremy Piven was an asshole, but Kevin said Jeremy was not only a great guy, he’d earned back-to-back Emmys for his performance. Ralph then suggested that Adrian wear looser t-shirts on the show so that his hips don’t look wide, and Adrian thanked him for giving him a new complex.

A caller asked Kevin and Adrian how long they planned on doing the show, and Adrian replied he’d do the show as long as they asked him. Artie warned the guys not to get too close to the people they’d be negotiating with when their contract was up, but Kevin replied that while HBO doesn’t give them “Tony Soprano money,” they are treated really well. Kevin and Adrian then said they loved working on “Entourage” so much, they’d do it for 10 years.