Following a discussion about which spaceship was more powerful – the Enterprise from “Star Trek” or the Battlestar Galactica from the show of the same name – Howard brought up that Regis Philbin was about to have bypass surgery. Howard acknowledged he always saw Regis as kind of “tragic,” explaining that, when Regis was younger, he tried to be both a comedian and a singer. Howard added he thought Regis was still “hustling” at 75 years old because he became famous so late in life, but Robin pointed out she didn’t believe he had to keep working given his wealth, which Artie speculated was at least $50 million. Howard went on to say he and Regis lived in the same building, and that he felt badly when he heard the news.

Howard announced that Jackie “The Joke Man” Martling would be stopping in later in the morning, adding that Jackie was offered a tryout for a radio show on Free FM, but Jackie wanted his approval before he said yes. Howard added, though, that he didn’t want to be tied to Jackie in that way anymore, which led to a discussion about the contract negotiations that caused Jackie to leave the program.

Gary then recalled how Jackie wanted to be paid a percentage of Howard’s salary, and Howard replied he informed Jackie a number of times that no writer in either radio or television ever made as much money as he did, and that he should’ve therefore focused on his own total when coming up with his salary.

Eric the Midget called in to talk about “American Idol,” and how he didn’t want Sanjaya to win because he wouldn’t want to see him tour. Howard then brought up Eric’s call from yesterday, where he talked about how he recently urinated in his sleep, plus how he called Johnny Fratto to order “a hit” on one of his former high school classmates. Howard went on to say he liked how Eric described how his sleeping outfit included “pj pants,” and asked him what color “pj pants” he was wearing this morning. When Eric revealed he was wearing “pj pants” this morning that were the same color as the San Francisco 49ers uniforms – gold and red – Artie replied that finding out Eric was a 49ers fan made him hate him “with even more passion” than before.

Howard then turned the topic back to “American Idol,” mentioning a Website that encouraged people to vote for the worst contestants on reality shows so that they’d win, noting that they had successfully test the site on the last Presidential election. However, Eric again insisted he wouldn’t vote for Sanjaya – or, as Eric called him, “that idiot” – because he didn’t want to ruin the “integrity of ‘American Idol’.” 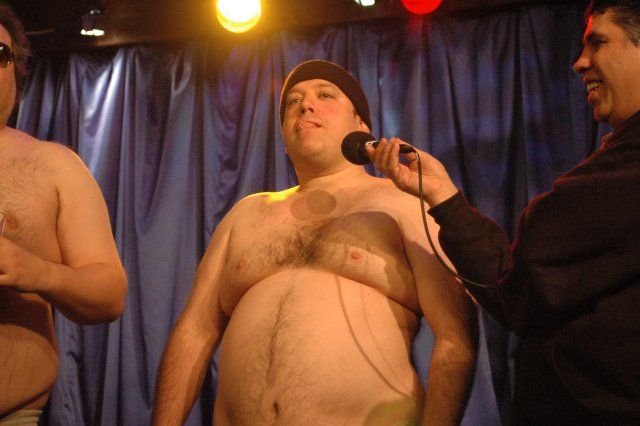 LIKE HE NEVER LEFT Photo: The Howard Stern Show

While Lisa G. was in the studio reading today’s Howard 100 News headlines, she reported there was still a controversy over whether or not Benjy had cheated when he lost 21 pounds in the first week of the Battle of the Blobs.

After Benjy admitted he gorged himself prior to his first weigh-in, Howard noted that wasn’t against the rules, and that he thought such a practice “made sense” given the competition. Benjy added everyone else in the game did the same thing before the first weigh-in, and that he thought his biggest critic, Scott the Engineer, who dropped nine pounds after one week, was simply jealous of his weight-loss success.

From a Fan to An Obsession

A guy named Bob called in to talk about how Oprah Winfrey was ruining his life because his wife was obsessed with her. Bob went on to say his wife not only watched “Oprah” every afternoon, but she also taped each broadcast and made him watch it with her again at night. Bob next said his wife was starting to cost him a great deal of money as well because she needed to own every book, movie and product Oprah endorsed, and that he even held an intervention in an attempt to break the spell Oprah had over her. However, Bob added the group had no effect on his wife, because she felt no one at the intervention “understood” Oprah.

Howard proceeded to take calls from listeners who gave their advice to Bob, with one saying she loved Howard, but wouldn’t alter her life if he ever told his listeners what to do or buy. Another caller credited Howard for his enrollment in law school, explaining Howard’s fight against the FCC made him want to get into law. Upon hearing the man’s story, though, Robin pointed out the main difference between his experience and what Oprah did was that Howard didn’t demand he attend law school.

Frequent caller, Wolfie, brought up Van Halen’s induction into the Rock and Roll Hall of Fame last night, and Howard played clips from the ceremony, including Michael Anthony’s and Sammy Hagar’s speeches. When a different caller reported Eddie Van Halen and David Lee Roth were both on Jim Breuer’s SIRIUS show yesterday, Howard revealed that it was actually Billy Mira doing the voice of David and Craig Gass playing the part of Eddie.