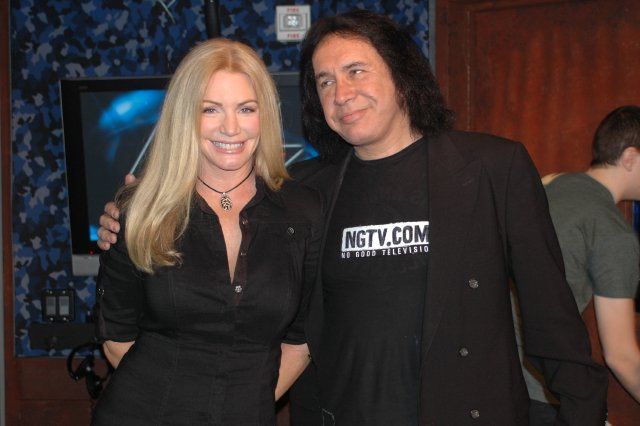 Gene Simmons and his girlfriend, Shannon Tweed, came in to talk about their reality show, “Family Jewels.” While the two got settled, Howard reported Gene and Shannon received facelifts on their show, and proceeded to show video of it.

Gene then noted he planned on putting the footage of the procedures on “Family Jewels,” but Robin pointed out she didn’t think his face looked much different now than it did prior to the surgery.

Howard then admitted again that he had plastic surgery done on his nose years ago, but added he wouldn’t get any more work done in the future. Shannon went on to say she just turned 50, and mentioned how she once had a relationship with Hugh Hefner years ago when she was in Playboy and Hef was around the same age as Gene is now. Despite her past, Shannon insisted she wouldn’t let her own daughter appear in the magazine, adding she didn’t think her daughter would be interested anyway seeing as how much self esteem she had.

Howard asked why Gene refused to marry Shannon even though she desired it, and he replied it was because he wanted her to have the opportunity to leave the relationship anytime she wanted. Howard still wanted to know why Gene wouldn’t take the plunge, and asked if he’d be upset if his daughter was dating a man who wouldn’t marry her.

Gene responded, though, that he didn’t think any woman should define her happiness based on any man, but Sal came into the studio was a theory of his own: Gene was unfaithful to Shannon on the road, and he wouldn’t be able to engage in that behavior anymore if he were married. However, Shannon said she’d “bet anything” that Gene never cheated on her, and Howard reported he’d arrange for a lie-detector test the next time they stopped by.

Howard Explains How He Gave Horrible News to His Parents