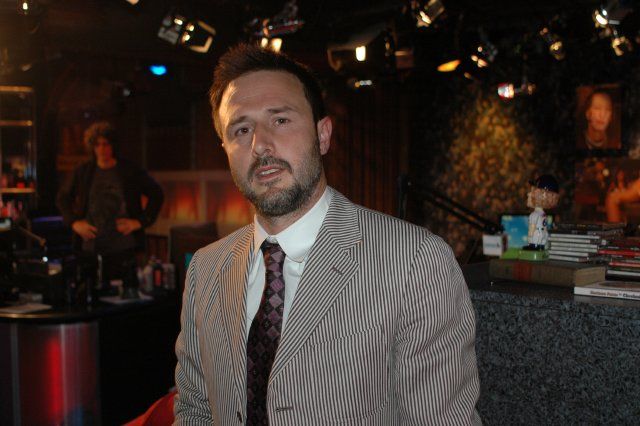 David Arquette came in for his second appearance on SIRIUS, and Howard informed him that he “liked his look.” In fact, Howard commented he thought David had “a GQ look,” but David laughed off the remark. Robin then pointed out she couldn’t believe the size of David’s wedding ring, which led Howard to say he thought David had “hit the jackpot” when he married Courtney Cox.

David went on to say he met Courtney on the set of “Scream,” and that they dated for three years before tying the knot.

Howard then reported he’d read in a tabloid that Courtney was having an affair, but David insisted the story wasn’t true. Dave proceeded to claim he didn’t even approach Courtney about the rumor because he trusted her so much, but Howard acknowledged he felt there were secrets in every relationship.

David added he knew the man with whom Courtney was allegedly having the affair, and again insisted he knew nothing happened between them. This led Howard to say that, if David was so confident about Courtney, he thought the two of them should sue the tabloid over the story. However, David replied that wasn’t going to happen because he was confident nothing was going on, and that was good enough for him.

The Second Time Around

Howard mentioned that David got a lot of press when he was on the show earlier this year because of what he said about Jennifer Aniston’s relationship with Brad Pitt. David responded, though, by laughing and saying he didn’t want to talk about the topic any further, but Howard assured him that he didn’t “say anything wrong.”

When David insisted he needed to “take the Fifth” on any further questions about Jennifer, Howard thought Jennifer’s people got to David, a claim David denied.

Howard then wanted to know who David’s and Courtney’s famous friends were, and he replied they’d been hanging out with Vincent Gallo for years. Howard went on to ask David if he had to befriend Vince Vaughn when he started dating Jennifer, which was a question David laughed at, but still refused to answer.

After David admitted he didn’t understand how Don Imus’ comment about the Rutgers basketball team was “that big a deal” even though he added he didn’t condone it, Howard announced David’s new movie, “The Tripper,” looked like a horror movie to him, which David said it was. David then explained part of the movie’s focus was on a killer’s obsession with Ronald Reagan, and also said he wrote, directed and starred in it as well.

David said he and Courtney were “happy” and “blessed” while also mentioning their daughter, Coco, was about to celebrate her third birthday. David then admitted he used to do drugs but decided to change his lifestyle the time he realized he was high on his dead mother’s birthday. Gary proceeded to come into the studio to ask David if the widely circulated photograph of Coco pulling down Courtney’s bikini top, exposing one of her breasts was real, and he confirmed it was true.