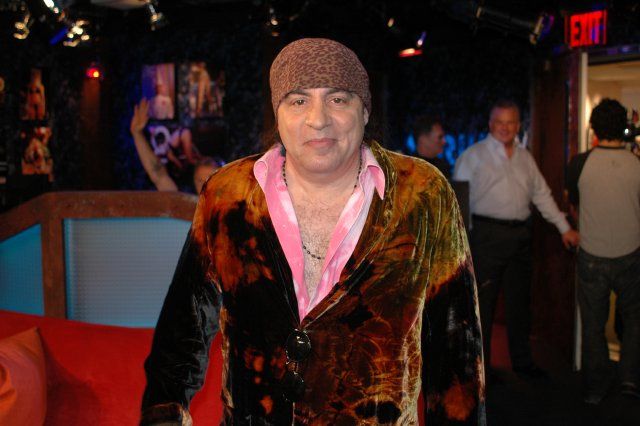 Steven Van Zandt, otherwise known as Silvio on “The Sopranos” and Little Steven in The E Street Band, stopped by to say hello this morning. To open, Howard asked if it was hard for Steve to leave Bruce Springsteen’s band. Steve said that it was just time for him to leave and go out on his own, which led Artie to note that the song “Bobby Jean” was purported to be about his departure. Howard then switched topics to “The Sopranos,” noting that James Gandolfini seems so perfect in his role as Tony Soprano that he should legally change his name to that now that the show is ending.

Change Up the Shocker

Since he had Little Steven in the studio, Artie tried to get him to agree that there was no chance Bruce Springsteen would ever appear on “American Idol,” explaining his bet that he would shock his balls if that ever happened. Even though Steven thought this was never likely to happen he did note that, given the way the music industry has changed, going on shows like “American Idol” was one of the few ways left for artists to get there works out. Robin then urged Steven to call Bruce and convince him to do “Idol” just for fun.

As Artie began to desperately argue against this, Steven pointed out that there really wasn’t much difference between Bruce going on “Idol” versus going on “Letterman,” which he has done.

To further rile Artie up, Steven noted that, like it or not, “American Idol” was a big part of today’s music business. He also revealed that he would not be surprised to see a new album from Bruce sometime in the next year, so there was always the chance they’d be looking for ways to promote it.

Howard noted that the main reason Steven had stopped by this morning was to promote a project he was very passionate about, “CBGB Forever,” a CD that raises money to pay off the very large legal bill the legendary rock club incurred as it struggled to stay open last year. Steven said the CD featured lots of rare tracks, like the Foo Fighters doing the Ramones’ “Danny Says,” Green Day doing “Favorite Son” and U2 also signing a Ramones tune, “Beat On The Brat.”

The Best Is Yet to Come

Back on the subject of “The Sopranos,” Howard asked if it was strange for Steven to see it all end, which Steven admitted it was because he loved getting to be someone else for a couple of days a week. Robin then asked if it had been hard for Silvio to kill Adrianna and Steven revealed that it is a lot harder to kill someone than it looks, even when you’re just acting.

Being careful not to have Steven reveal anything specific, Howard asked if we could expect to see some violence in the last 2 episodes – which Steven assured him would be the case. Artie mentioned that he loved the way David Chase, the creator of “The Sopranos” named all the episodes, noting the episode in which Christopher died was titled “Heidi and Kennedy,” which were the names of the two girls in the car Christopher swerved to miss.

Where Sell Out Shop

Marriann from Brooklyn called to say how much she loved Steven, telling a story about how he signed a book for her once. Howard hung up on her though as she started to complain that Bruce was no longer the “common man’s” rock star because he now shops at Barney’s. Steven concluded by saying that, while he can’t reveal the ending of “The Sopranos,” it is a brilliant ending. While Howard noted that, in addition to acting and playing music, Steven programs two music channels at Sirius, “The Underground Garage” on channel 25 and “Outlaw Country” on channel 63.