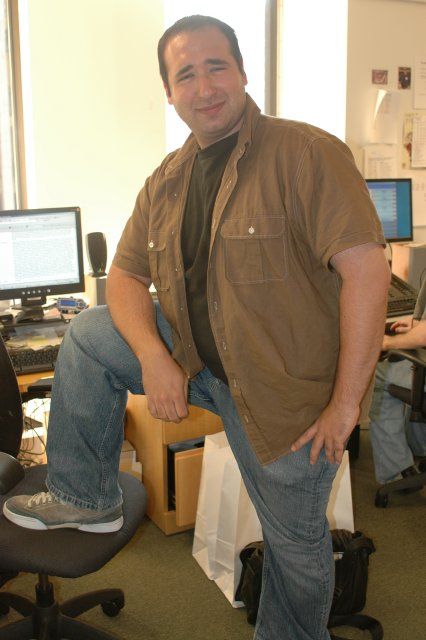 Artie says he was listening to the Intern Show, and was upset that one of the new female interns rated him a 1.5 on a scale from 1 to 10.

Jon Hein got a 7 for having a nice personality. Jason got a 5 being funny. Howard got an 8. JD got a 3 because he’s awkward.

Lindsay, the intern in question, came in to defend her ratings, saying personality counts, but she loves skinny guys. Lindsay offered to up Artie’s score, but Artie said he respects her honesty more than the “bitches” who come in who claim to love him.

Howard asked Lindsay about the pole-dancing classes she also talked about on the Intern Show. Lindsay says she’s not taught by a stripper, enjoys the classes for the exercise, and her pole-dancing “name”/alter-ego is St. Luscious.

Lindsay said she wants to be an entertainment reporter, and Artie retorted that he was considering bringing an intern to the Letterman show on Wednesday, but no longer felt like it after being rated a 1.5. Howard asked Lindsay which staffer she’d most like to sleep with. After some deliberation, Lindsay settled on Jon Hein, adding that she has a weird taste in men, so Artie shouldn’t be offended.

Lindsay then said Artie’s 1.5 is because of his humor, which doubly upset Artie, because Jason rated a 5 based on the same thing.

Gary said Jason’s humor-based 5 rating isn’t the only interesting thing about him. He once took “confidence pills”, and pissed off Tom Chiusano by making jokes during a sales meeting. Jason came in to say he’s back on the same drug, which he thanked, along with the weight-loss contest, for his new 5 rating, as he’s never rated above a 3 before.