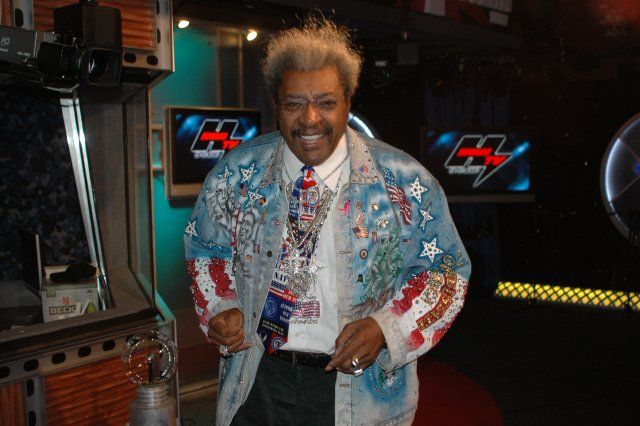 Boxing impresario, Don King stopped by to promote the upcoming Tito Trinidad vs. Roy Jones fight, and Howard noted Don’s sparkling, jewel encrusted jacket and asked if was wearing conflict diamonds. Don said, “Oh, yes.” Howard wondered if Don was still a George W. Bush supporter, and Don claimed Bush only meant great things for this nation. Don also told the crew he avoided the Vietnam draft because he was in jail, declared General Patreus was the Man of the Year, and he recounted his recent USO tour of Iraq. Howard asked Don if Mike Tyson had really beaten up one of his security guards, and Don admitted that Mike “may have hit somebody, but it wasn’t one of his security guards.” Don also picked Muhammad Ali as a better fighter than Tyson and confessed that he had a touch of “ED”. Howard asked when Don first noticed his erectile dysfunction, but Don avoided the question. Don also bristled when asked about Lennox Lewis and whether he could still pee standing up.

Don On the Greats

Artie asked Don to name the greatest fight he’d ever seen, so Don remarked that it was a three-way tie; “The Rumble in the Jungle,” The Thrilla in Manila,” and Holmes vs. Norton. Howard wondered if Don had seen the pictures of Oscar de la Hoya (allegedly) wearing lingerie, but Don refused to comment and began shouting something about Satan. When pressed further, Don eventually claimed he didn’t know which pictures Howard was talking about.