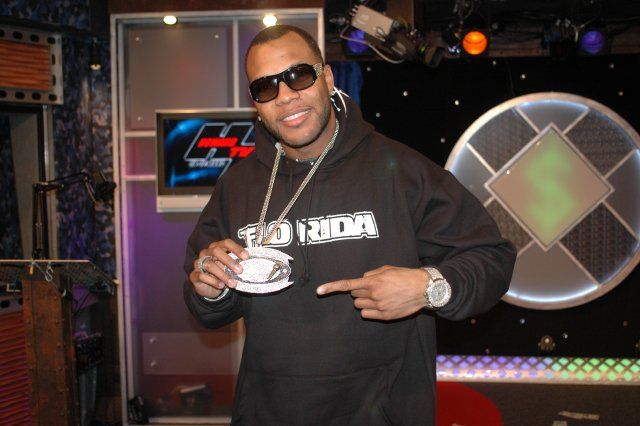 Rapper Flo Rida stopped by to sing “Low,” currently the number one song in the country, and kicked things off by telling Howard how he struggled for a long time before finally scoring a hit song.

Howard noticed Flo’s jewelry, so Flo explained he’d already spent $400,000 on jewels since “blowing up.” Flo also said he was voted “most attractive” in high school and first got laid when he was only thirteen. Howard asked Flo if he’d ever had an orgy, and Flo admitted he had; recently, in Hawaii, he had 11 women up to his hotel room, and things “got a little crazy.” Flo said he also gets a lot of groupies, some of whom try to remove his pants while he’s still performing. Howard wondered if Flo accepted random blow-jobs, but Flo denied it and said he would never risk his health.

Flo asked Howard how many women he’s ever had at the same time, and Howard answered “Two.”

Flo replied, “You keep timesin’ that and timesin’ that, and you’ll end up with eleven.” Howard was amused by Flo’s logic, laughing, “You are really macho.” Flo then presented Howard with some cash (which stunned Howard; “This is real money! Wow.”) to throw in the air [ed: thereby “makin’ it rain”] for his dancer during his performance.

Executive producer Gary Dell’Abate speculated that Flo must’ve brought over $1,000 in singles, but Flo scoffed, claiming the total was “more like $5,000.”