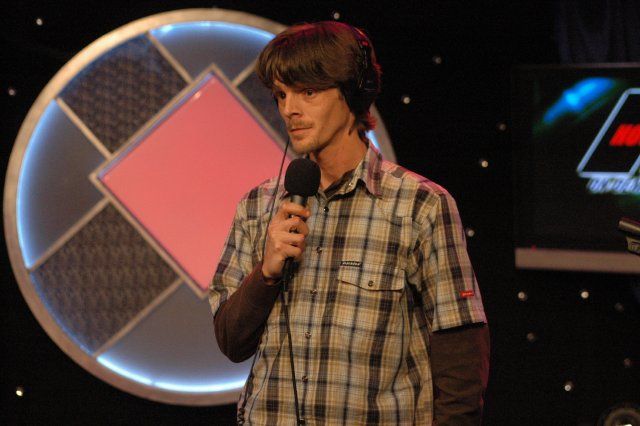 Jamie Thomas stopped by to promote his comedy tour, and both Howard and Artie were taken aback by Jamie’s “hillbilly”/”meth-head” look. Howard told Jamie’s story: He quietly gave up his job as an engineer to pursue a career in comedy, and 14 months later, his wife found out when their mortgage check bounced. Now Jamie drives around the country in a tour bus with his wife and kids, stopping periodically for comedy gigs – which only pay him $200. Jamie told the crew about his strange childhood as the son of two “slow adults” and brother of two more. Howard wondered if Jamie felt that “slow adults” should be allowed to procreate, and Jamie said no – even though that law, if enforced earlier, would’ve prevented his birth. Artie asked to hear Jamie’s act, so Jamie got up and did some of his material. The crew thought they wanted to hear more after the first bit, as it was too short, so Jamie did a second bit.

When Jamie was done, he asked what everyone thought. Robin thought Jamie had “a bit of a delivery problem,” and Artie told Jamie he should stop altogether. Howard agreed with Artie, saying Jamie needed more seasoning. However, after learning that, while Jamie had been writing and doing sketch comedy for 10 years, he had only been doing stand up for a year and a half. Artie thought this explained his “greenness” and suggested that a dejected Jamie try telling old jokes at his really rural gigs (like, say, in Mississippi) to build confidence. Artie then offered Jamie a spot on the bill at one of his upcoming gigs, and Jamie accepted.