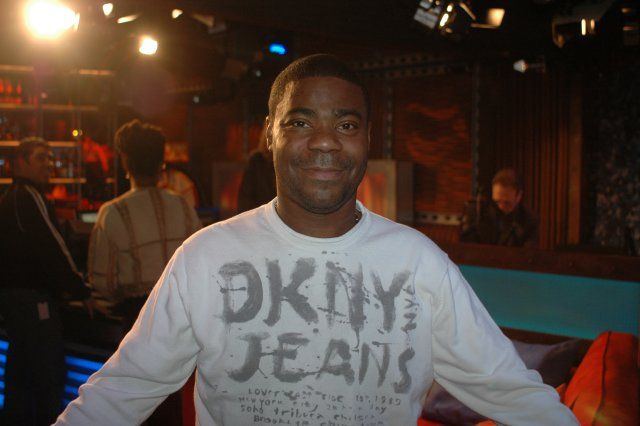 Tracy Morgan stopped by to promote his new film, “Superhero Movie,” which also features Pam Anderson, and again told the crew how he loves to make his woman gag with the “bulbous” head of his penis.

“She can take it, man. She’s a woman,” Tracy told Howard.

Tracy then began discussing how he recently reconnected with his mother after a long period of estrangement but denied any correlation after Howard tried to connect the two subjects. Tracy said he’d “been buying pussy since high school” up in Harlem, where you could play with a beautiful woman’s “doo-doo berry” for $50. Tracy added that he loves a woman’s “discharge.”

He also claimed he never used rubbers, was too “old school” for the pull-out method, had a 9-inch penis, and was going to kick his kids out of the house should their penises get bigger than his. “Then they’re not my kids anymore. They’re a threat,” he told Howard with a laugh.

Howard asked Tracy who he was voting for, so Tracy said he couldn’t wait for the president to be a real “Head N—a In Charge,” adding that Obama would find all the terrorists in short order if you told him that bin Laden had insulted his mother.

Tracy then revealed that he recently divorced his wife of 21 years. Now he’s married to the road, but did recently find the time to hook up with an unnamed A-list actress, telling Howard, “You live once, goddamn it.”

Tracy also told the crew that he wanted to keep making babies until he’s well into his 80s, but the woman has to be right. Tracy added he wanted to have a girl, as he already has three boys, but lately he’s been too busy spending all his money on shoes and CDs. Tracy said he had over 10,000 pairs of sneakers.