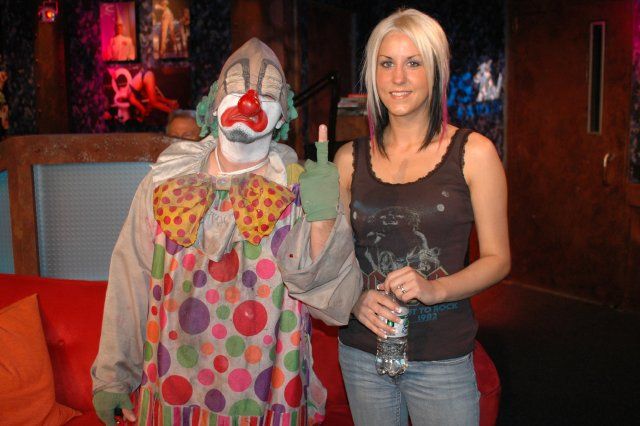 Yucko the Clown stopped by with his new wife, Nicole, and Howard asked Nicole how she was liking marriage. Nicole said: “It’s shitty. I drank a bottle of Patron and walked down the aisle and did it.” Howard thought Yucko was kind of “clingy and desperate” to marry Nicole when she obviously wasn’t committed to the idea. Yucko took issue with the characterization – but confirmed that Nicole was so drunk at their wedding that she puked all through the reception. Yucko told the crew that he and Nicole weren’t even doing that well in the bedroom and didn’t have sex until a week after their wedding: “The honeymoon was fun…when she wasn’t on the rag.” Nicole punched in: “Thankfully.” Howard asked Nicole what was going on, so she explained: “He’s gross.” Nicole added that she wasn’t too much “into” Yucko sexually anymore and might be interested in getting out of the marriage: “I don’t want to live a life of regret.

Howard laughed that Nicole already plans to move out of their home in Georgia to Jersey. She said that Sal has offered to help get her a job at Rick’s Cabaret. Nicole clarified: “Just cocktail waitressing. Nothing more than that…It’s not about going out with other guys or anything. It’s about pursuing my dreams.” Howard then asked the question on everyone’s mind: “Are you in love with Yucko?” After a long pause, Nicole cracked: “No.”

Howard thought every sign pointed toward an eventual divorce: “She said to him, ‘I don’t want to get married’…she hasn’t had sex with him in three weeks.” Yucko laughed at the admittedly painful truth, explaining: “[Laughing]’s all I can do.” Nicole said Yucko claims he’d stay married to her even if she never banged him again – and then threw the knockout punch, confessing that she’d looked into annulling their marriage, but the only acceptable grounds for annulment in Georgia are extreme, like incest.

Nicole thanked the staff for their cash wedding gifts: “It’ll help with the divorce fees.” Yucko had little to say in response: “I don’t know. F’ it. She can do whatever she wants. I don’t have a gun to her head…yet.” Nicole complained that Yucko had gotten fat, so Artie showed her his belly, hoping that he’d give her a little perspective. Nicole laughed that the sight was horrible but not enough to change her mind. Artie apologized: “Yucko, there’s nothing left I can do.” Yucko still didn’t seem to get the point, so Nicole was blunt: “You’re like a lovesick bitch. You act so desperate, and that’s what turns me off.” Artie advised the two to walk in different directions when they leave the studio and never see each other again. Howard agreed and asked Nicole to just pull the trigger right now and put Yucko out of his misery. Nicole relented: “Right now it’s over.” Yucko only response was a sad honk from his trademark punchline-punctuating bike horn.