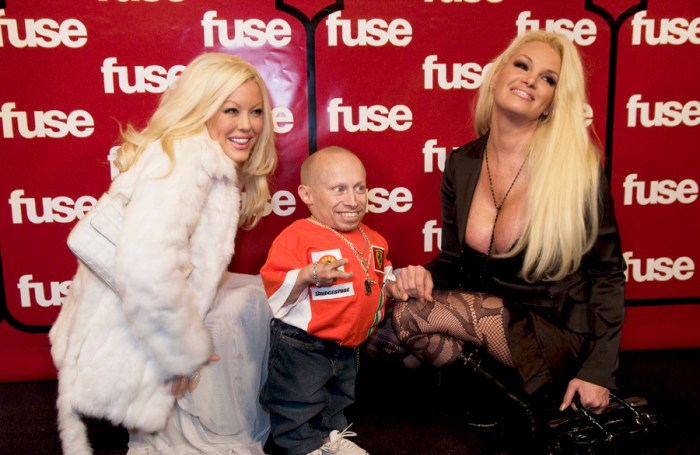 Verne “Mini-Me” Troyer stopped by to promote “The Love Guru” and denied reports that Mike Myers was difficult to work with: “I haven’t seen anything like that…I have a good time with him.”

Howard said Verne had good reason to be dishonest there, but Verne refused to comment further. Verne then told the crew how advice from Robert Downey Jr. and a second visit to rehab helped him finally put down the bottle for good.

Verne also bragged that he could see Lindsay Lohan’s panties while he was onstage with her at the MTV Movie Awards: “I don’t think she knew she’d be going out there with me…They were pink.”

Howard wondered what Verne would do if he managed to get an insanely hot chick like Lindsay or Megan Fox, and Verne responded without pause: “Slap her around a little.” Howard laughed at his quick answer.

Howard asked Verne if growing up as a 2’8″ person was difficult, and Verne claimed it really wasn’t that bad, as his parents raised him (“more-or-less”) as a normal kid. Verne said his siblings were normal-sized, and he had to do everything they did: “I learned to deal with it. I don’t think about it, really.” Howard asked when Verne last got laid, and Verne was happy to report that he scored about a week ago. Verne noted that he’d also once bagged a Playmate of the Year (and she wasn’t the only Playmate), a B-list co-star and three chicks at the same time. Howard wondered why Verne was so upset by Heath Ledger’s death, so Verne explained that they became friends on the set of “The Imaginarium of Doctor Parnassus.” Verne then showed the crew the tattoo he’d gotten on his hand as a tribute to Heath, explaining that it was a heart symbol that Heath had drawn himself.