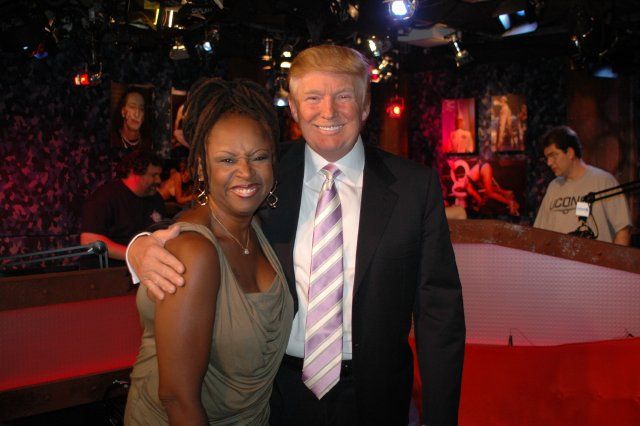 Donald Trump stopped by to promote Affliction’s upcoming Banned fight night, and Howard immediately asked him about the economic recession. Donald said he easily avoided any damage caused by US recessions by spreading his assets out: We have 73 projects going on all over the world…but we need a new leader. We gotta get rid of this guy fast. Donald added that if he were in charge, those oil prices would drop like a rock. While they were talking about the economy, Donald noted that he recently sold a house in Palm Beach to a Russian guy for $100 million, and wouldn’t have been nice if an American had bought it? It’s pretty sad when you think of it. Most of the people that were negotiating [for the property] were foreigners. Donald then asked if he would be invited to Howard’s wedding, and Howard said he was: Just to help you out, the invitation will read ‘To Donald Trump and current wife.’

Donald told the crew that he recently pitched O.J. Simpson to NBC executives as a castmember on Celebrity Apprentice, but they freaked out. Howard wondered why Donald would even try the pitch, and Donald answered flatly, saying O.J.’s presence would guarantee insane ratings. Donald confessed that other than pairing up O.J. for a ratings coup, the two weren’t friendly: I abandoned O.J.. When I realized he’d killed his wife…I took a pass.

Howard asked Donald if he’d ever slept with a fat woman, but Donald was ready: I’ve slept with women who got fat… Artie wondered if Donald had ever slept with multiple women, and Donald was nonplussed: Haven’t we all? The gang also wondered who Donald considered to be the hottest woman in the world, so Donald cited the winner (and runnerup) of his recent Miss Universe pageant and Jennifer Hawkins, an Australian beauty who served as one of the contest’s judges.