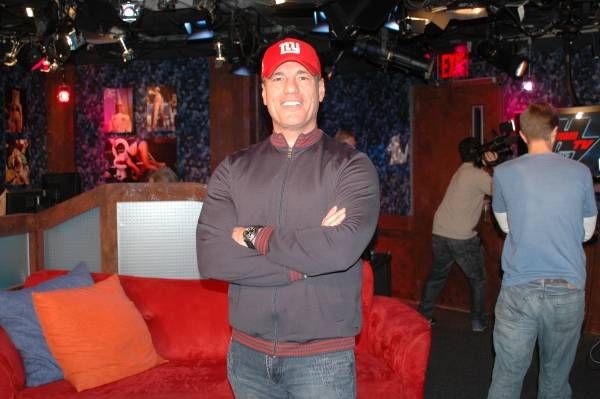 Goumba Johnny stopped by to promote his new book, “So You Wanna Be A Mobster,” and Howard first asked him about his NFL career. Johnny said he signed with the Jets out of college, “but I hurt my neck and I wasn’t good enough.” Johnny said he took a job as a bodyguard, which led to a job at Scores: “[Strip clubs] are pretty lonely places…I was dating a [stripper] and then she goes to work and has both breasts in some guy’s face and is winking at me. I said to myself, ‘This is not the way you were raised.'” Johnny said he didn’t become “Goumba Johnny” until he got his first radio job and needed a handle that was easier for the audience to say than his given/Italian name. He started as a joke writer/producer/sidekick on an evening drive show while simultaneously working at Scores: “It was very very odd.” Howard asked if the hectic schedule led Johnny into the stimulant drug scene, but Johnny said no: “Not at the time. I was working so much, I didn’t have time.”

Johnny told the crew that while he was working at Scores, he became ensnared in an FBI investigation that also included John Gotti – and had to spend five months in prison for tax evasion. Johnny said, “My father saw me on CNN. He said, ‘You’re not supposed be on CNN unless you’re a flood victim’…I told him I didn’t know John Gotti and he yelled, ‘I’m your father and I don’t believe you!'”

Prison was hard: “Right when I got in I got an education…I look around and there’s five black guys in my room. I said, ‘Am I the only white guy here?’ and this guy looked up and said, ‘You’re not white. You’re Italian.'” Howard asked if Johnny could’ve been killed in jail, but Johnny didn’t think so: he just met a few guys who he was glad to see locked up. Johnny said his only confrontation happened after he got in “an argument over sports”: “I did what I had to do.” Johnny said was eventually cornered by cell mate:

He said, ‘I’ve done two years in the hole in Louisville…You’re an inmate. I’m a convict.'” The guy actually took Johnny under his wing and taught him the rules of prison survival, like never smiling about your mail in front of the lifer convicts who’ve been waiting years for a letter.

Johnny laughed that he’d collected some good Chuck Zito stories during his time at Scores.

Johnny said he’s come across a few dudes that met the wrong end of Chuck’s fist, like Mickey Rourke and AJ Benza, and all of them got knocked out. “And then they sit down and have dinner. That’s the best part,” he laughed.