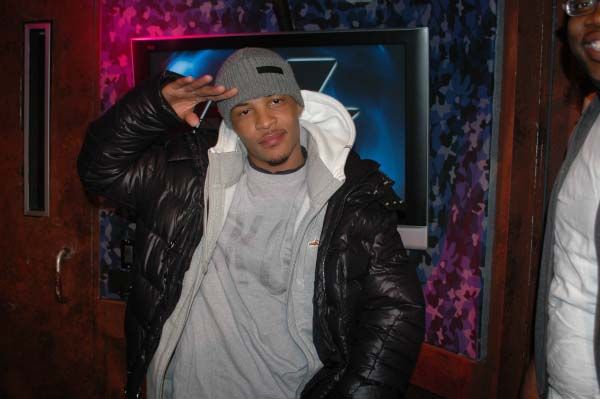 T.I. stopped by to promote his new album “Paper Trail” and Howard told him he was “one tough motherf’er.” T.I. said he was toughened by growing up in Bankhead, a “less than upper class” neighborhood of Atlanta, and by having a grandmother who “had a hand on me when necessary.” Howard asked when T.I. lost his virginity, and Tip (as his friends call him) laughed that he first got it on at the age of 11: “She was 13 or 14…I might’ve initiated.” Howard was blown away: “I don’t even think I could get hard at that age.” Howard asked what T.I. was doing buying weapons all the time, so Tip explained: “It’s definitely not about looking cool…if you were familiar with my past, you’d recognize there are certain significant dangers that are real.” Tip added that his best friend was shot down in front of him: “He died in my arms.” Howard thought T.I.’s behavior might contribute to negative attention: “I mean, you were throwing around wads of cash in the green room.” T.I. replied that he now felt safer than he’d ever been: “I’m federally monitored.”

Not Planned, But Welcome

T.I. noted that he soon had to report to jail for a year-and-a-day-long prison sentence, and he doesn’t plan on accepting any visitors: “I tell ’em, I’ll see you on release day.” T.I. (who is 28) added that he has six children by three different women, so Robin asked if they were all planned. T.I. deadpanned: “All of ’em? They were all welcome.” Howard told Tip that his “Live Your Life” song spoke to him – and then danced to it as proof. T.I. loved his dancing and had a pretty good laugh. Dominic Barbara called in to ask if T.I. was wearing an ankle monitor, and Tip confirmed that he was: “Is this my P.O.?” T.I. pulled up his pants to show the crew, so Howard egged him on, wanting to see more: “You got a big penis?” T.I. was hesitant: “Let Robin ask me.” Howard asked if Tip ever hung out with any famous people, so he cited a recent election night party he attended at Will Smith’s house. Howard wondered if there were any McCain fans there, but T.I. laughed it off: “Nah! It was definitely an Obama crowd.”

Howard wondered if T.I. was worried about protecting himself from other prisoners’ sexual advances while he was in jail, but Tip didn’t think so, adding: “That’s not even worth joking about.” Artie confessed: “My first night in L.A. County, I was traded for a pack of Newports…I just had to stand there while the guy beat the shit out of me. It was better than blowing a guy.” T.I. laughed his agreement and promised to return if Howard gave him financial advice: “You gotta show me how to get the money you’re getting over here.”