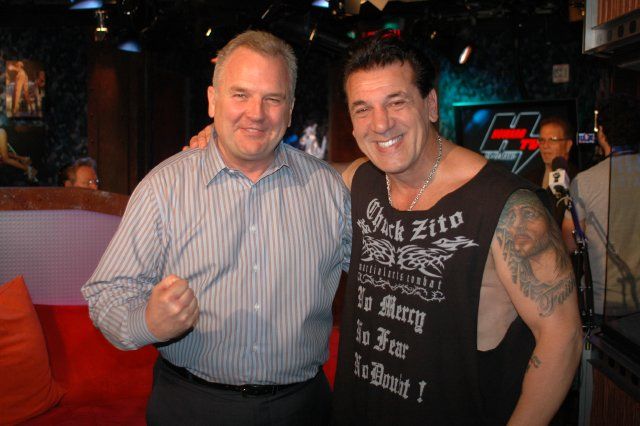 Chuck Zito stopped by to promote his show tonight on Howard101 at 7pm ET, and Howard immediately asked why Chuck shaved his mustache. Chuck said he grew the Fu Manchu for a role, but he’s since shaved it for another role: “A lot of people told me it made me look younger, [which got me] thinking about growing a full beard.” Chuck then told the crew about cracking his head open while filming his own stunts on the set of the new Catherine Zeta Jones/Chuck Zito vehicle. Howard marveled at Chuck’s new, large-lettered “Faith” tattoo, so Chuck replied that he hadn’t found god – it’s a tribute to his 8 yr old niece, Faith, a cancer survivor. Chuck said the ink took 20 hours in the tattoo chair. Howard commended Chuck’s fortitude and noted that Chuck, while a “real man,” is also a stickler for proper manners. People who disrespect him usually end up with a few bruises.

Is the Zito Beatdown Coming to Pay-Per-View?

True to form, Chuck told a story about being annoyed by a dinner date’s rude/constant text-messaging habits. Chuck said she went for a smoke in the middle of the meal, and when he went out to find her, he found her talking with some dude. Chuck nearly punched the guy out: “He was twice my size. The least he could’ve done was take a swing at me.” Unfortunately, the guy backed off and Chuck ended the evening without administering a “beatdown.”

Howard asked Chuck about his involvement with the UFC, and Chuck confessed that he’s been training, but he wouldn’t fight for free. Howard told Chuck, “If you can just get one good punch…what if you can’t get to the guy?” Chuck didn’t think it would be a problem: “I can get to the guy. Don’t worry about it.” Chuck bragged that he wouldn’t have to rely on his striking abilities, either: “I’m pretty good on the ground now, too.

Robin wondered if Chuck wanted to “give love a try,” but he wasn’t in to it: “Not really.” Howard tried a different angle, asking about the last time Chuck banged a chick, so Chuck laughed that he recently banged a Scores stripper and refused to cuddle afterward: “There’s a time to come and there’s a time to rest.” Chuck said he also once banged three chicks in one day in Vegas. One of them was a thousand-dollar-an-hour prostitute who banged him for free, telling him she was like a potato chip: “Free-to-lay.”

After noticing Benjy’s bloody lip, Chuck denied responsibility: “I didn’t do that!” Chuck changed the subject, telling the crew about the time he spent four months in Japanese jail: “The worst prison in the United States is like a hotel in Japan…over there, you’re locked down.” Chuck remarked that he was let out of isolation for just one hour a day, and only then in a cage separate from the others: “All the other prisoners were looking at me. They started saying, ‘Rock-y! Rock-y! Rock-y!'”