Howard welcomed Brenda Acevedo, Miss HowardTV of the Year for 2008, to the studio and congratulated her on the new title. Brenda nervously stuttered a response, and Howard thanked her for the ego boost: “In high school I would’ve cut my nuts off for you.” Brenda showed the crew the diamond necklace she won as part of the prize, and Artie complimented where it fell: “It hangs right in the middle of your big, pendulous breasts.”

Brenda asked Robin how she felt about her breast-reduction surgery, so Robin told her to be careful: “I’ve seen some breast-reduction jobs that are just heinous.” Brenda said she was still considering it: “When you come out and you’re all natural, some things just aren’t where you expect them to be.” Brenda also said she was huge Artie fan – but had a serious boyfriend, a professional poker player. 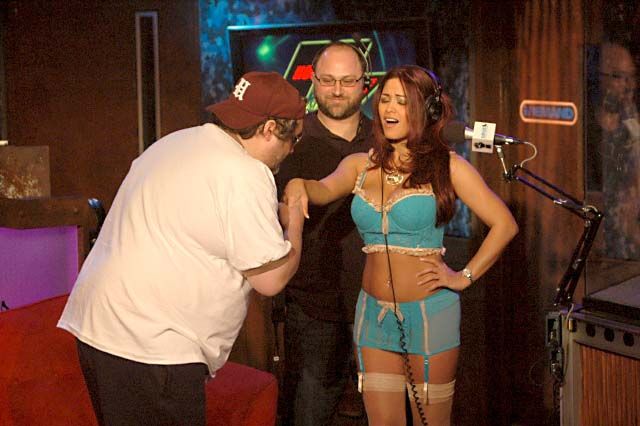 Despite this cockblock, Brenda asked if Artie would like to feel her breasts (with her boyfriend’s permission of course). Never being one to look a gift horse in the mouth, Artie jumped up and gave them a squeeze. Brenda was thrilled: “It’s Artie! I don’t think I’ll realize it until I watch it back and think, ‘What the hell did I do?'” Howard asked if Artie used the right amount of pressure, but she wanted more: “He was too soft.” 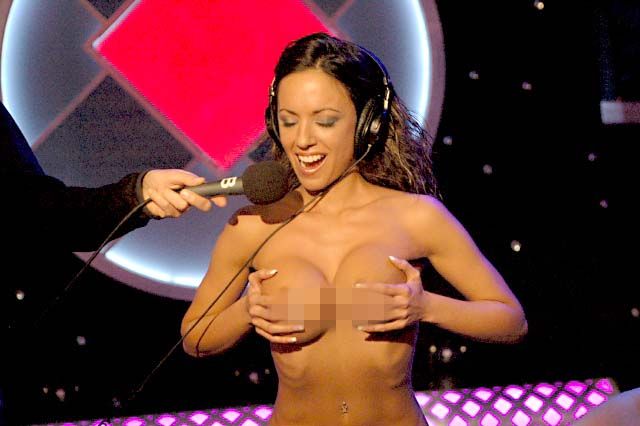 Howard then welcomed Christie Kane, Miss HowardTV for April, who spoke with a strange affect. Howard asked if she was hard of hearing, but she denied it: “No, I’m just from Brooklyn.” Howard then ran Christie through her sexual history, including the time she and a friend took turns tying each other up and performing oral sex. Christie laughed that she even hooked up with a drunken Hasidic man at a recent party: “I’m just a very sexual person.”

Christie claimed she masturbates ten times a day and was once caught mid-diddle in a tanning booth. Emboldened, Howard wondered if the crew could take a look at her boobs, so she whipped ’em out. Robin asked if it was a good view, and Howard answered quickly: “Yes, it’s good! They’re two boobs!” Christie then jumped on the Sybian and went for a ride: “It vibrates a lot.” After a scream-heavy ride, Christie had trouble standing: “That was so f’ing hot…I wanna take it home.”