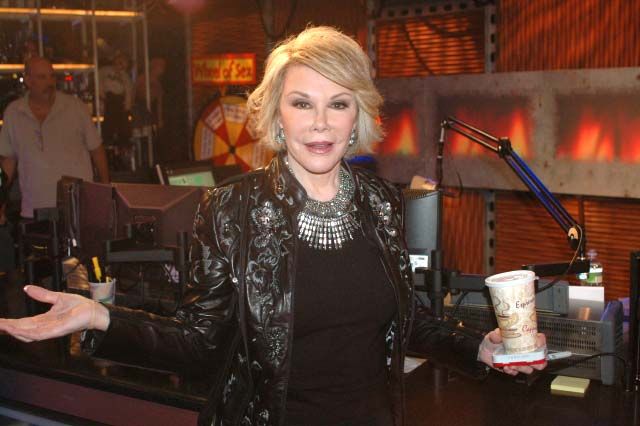 Joan Rivers stopped by to say hi and, since Ed McMahon’s death was in the news, told the crew why she left her “Tonight Show” guest-hosting gig at NBC for Fox: “Because they had a letter out that said, ‘Here are the ten people that can replace Johnny.’ And it was all men. I wasn’t on it.” Joan said she never felt supported by Johnny Carson: “Johnny was very vindictive…he was a killer. That’s why he got what he got.”

Joan revealed that her most recent relationship, to an unnamed 75-year-old, ended over the weekend: “I got dumped again last Sunday.” Howard asked if she was lonely, and Joan joked: “Only when I’m having an MRI…it was nice to have someone pick up the check.” Joan confessed that it was almost necessary, as she’s going broke: “I have a great life, but I live very high.”

Joan’s Grandson is Not Her Favorite

Joan told a story about her grandson, Cooper, not knowing he was Jewish: “He called me a big fat Jew pig.” Howard asked Joan to make Sophie’s Choice between her daughter and Cooper, and Joan was definitive: “Melissa. Isn’t that terrible?”

Howard thought the decision was interesting, as Melissa frequently (and publicly) voices her anger with Joan over a nosejob Joan forced her to get at the age of 18. Joan shrugged it off: “She’s furious about it…if I had been a stranger and done it, she would’ve said, ‘This wonderful woman.'”