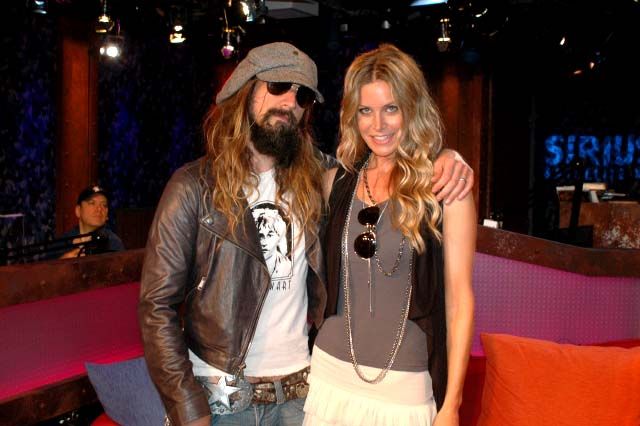 Rob and Sheri Moon Zombie stopped by to promote “Halloween 2,” and Howard asked if Sheri’s nude scene in “House of 1000 Corpses” was on MrSkin.com. Sheri was distressed: “Oh god…[that’s] just demented.” Howard wondered if Sheri, who doesn’t want kids, ever talked with Beth O about it, and Sheri said she had: “Yeah, we do…she doesn’t want kids.” Rob laughed: “Kids are horrible.” Howard asked why Rob asked Sheri to marry him when he knew he didn’t want a family, so Rob joked: “I don’t know.” Sheri explained: “I think he probably regrets it…you know what happened? Some of my girlfriends started getting pregnant and I didn’t want kids but I wanted that commitment.” Sheri said she was actually the most insistent about not starting a family: “He would have kids if I wanted to.”

“I had an experience before I met Rob…it was one of my roommate’s friends actually. I think I was just on ecstasy.”

‘The Munsters’ and ‘Halloween 2’

A caller wondered who Rob liked better: “The Munsters” or “The Addams Family.” Rob picked “The Munsters,” and Sheri agreed: “Herman Munster is just to die for.” Rob said he’d love to see Brad Garrett as Herman in a Munsters movie: “We saw him open for Sinatra and he did Herman Munster and he was hilarious.” Sheri confirmed the story, saying it was right before Sinatra died. Howard asked why Rob made “Halloween 2” when he’d previously insisted he wouldn’t make a sequel to his original “Halloween,” so Rob explained that he’d heard the remake’s sequel was going straight-to-video and decided it wouldn’t do justice to his previous work, and added: “There is enough nudity to keep Mr. Skin happy.”